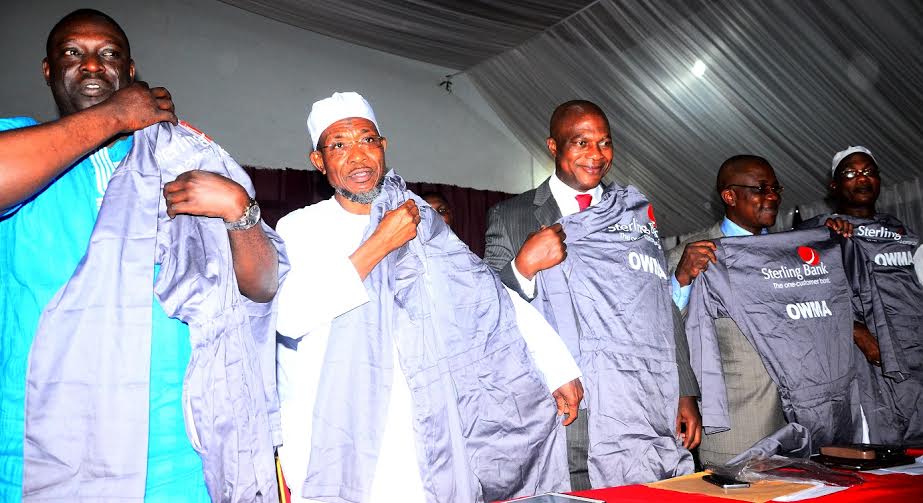 The Governor of Osun, Ogbeni Rauf Aregbesola has reassured on prompt implementation of pro-masses policies and programmes targeted to bring the desired change and succor to every resident of the state.

The Governor also reaffirmed his administration readiness to maintain a top position among its peers at championing good environmental sanitation.
Aregbesola stated this during the presentation of highway managers’ kits to the members of Osun Waste Management, OWMA.
Governor Aregbesola who identified environmental challenges as part of the reasons his administration took aggressive steps towards waste management and sanitation, saying the efforts started with the 90 days emergency declaration on sanitation and zero tolerance for filth and drift at the later end of the launching of the O’Clean and O’9lean plus initiatives.
He boasted that the available records and accolades earned through the initiative had without any sense of doubt positioned the state as one of the safest states in environmental management.

READ  Children’s Day Speech By Governor Rauf Aregbesola: – Protect The Right Of The Children In The Face Of Violence And Insecurity And End Child Marriage

Analyzing some of his achievements, Governor Aregbesola said his government had contributed significantly in the reduction of sanitation related diseases.
He emphasized that the present government had modified the monthly environmental sanitation observed every last Saturday of the month to include markets and workplaces sanitation every Thursday of the week.
According to him, “our administration has also dredged and channeled major rivers and streams throughout the state so as to prevent the palpable loss of lives and property usually associated with the menace of flooding. “We have also ensured that Osun Waste Management Agency created by this administration received all necessary attention and support to fulfil its mandate of keeping the state clean.
Governor Aregbesola who commended management of Sterling Bank of being the first corporate entity to deem it fit to collaborate with the government
on waste management efforts.
He said, “we thank the management of Sterling Bank for this laudable feat of donating these set of uniform kits to our road sweepers and highway managers.
He therefore urged other corporate entities to emulate the good gesture as part of their corporate social responsibilities.
Earlier, the Executive Director, Sterling Bank Plc, Mr. Lanre Adesanya, said the presentation of uniforms to refuse packers and environmental highway managers was in line with the bank’s strategic focus on the environment as one of its corporate’s social responsibility priorities.

He commended the state government’s  efforts at changing the landscape of the entire state in spite of the challenges being experienced both in the private and public sectors.
Mr. Adesanya noted that the efforts are undoubtedly a reflection of an unparalleled determination and commitment to have in place a state that can be proud of.
He said, “at Sterling Bank, environmental cleanliness is one of the cardinal points of our Corporate Social Responsibility thrust that informs the bank’s continued commitment of enormous resources towards ensuring that the environment where we live is habitable.
“As we embark on this mission, we consider it of utmost importance, to protect those whose job is to manage and clean the environment that is why we came up with the idea of producing uniforms for highway managers to ensure their safety, make them more relevant in the society and as well as dignify them while discharging their duties.
He therefore assured the state of continuous support and collaboration in maintaining a healthy environment in the state.
In his remarks, the General Manager, Osun Waste Management Agency (OWMA), Alhaji Ganiyu Oyeladun said the government of the state of Osun, through Osun Waste Management Agency (OWMA) has in the recent years embarked on various activities under the O’OCLEAN and O’OCLEAN PLUS initiatives with the focus on achieving the government objectives of restoration of healthy living and empowerment for the citizenry.

Alhaji Oyeladun noted that the current administration has successfully placed a high priority on environmental sanitation and waste management, hence the creation of this agency.
He said OWMA has succeeded in entrenching the culture of cleanliness among the citizenry, adding that with the efforts put together by the agency, there is sharp reduction in sanitation related diseases just as there is drastic reduction in mortality and morbidity rates.
The OWMA General Manager explained that in the previous years, the agency has consolidated on the gains of the various components of the O’Clean plus initiative, which include “PSP waste management, Igi-Iye, Biogas, waste Nylon buy back, O’clean Marshal, among others.
Alhaji Oyeladun pointed out that the agency was able to achieve the feats through the significant cooperation of members of the public on the regular statewide environmental sanitation exercises, as well as weekly market and workplace/office sanitation every Thursday.
He commended the state government for its untiring efforts at ensuring clean, hygienic and safest environment across the state since inception.
According to him, “the OWMA appreciates the heavy investment of this government on waste management, which includes the servicing of the refuse compactors, the management of the central dumpsites and others scattered around the state, regular payment of the stipend to about 500 Road Managers and other sundry issues.
“These efforts have continued to attract awards for the state government both locally and internationally.
“The sixty-one units (61) of roll-on-roll refuse vehicles with two hundred and forthy-four (244) waste bin were distributed to private waste collectors under the private sector partnership programme in waste management.
“The PSP initiatives had succeeded in providing employment opportunities for the citizens as well sustaining the gains of the O’clean programme.
“The initiative also has the potential of achieving the zero tolerance for dirt and filth in the state, as well as increasing the internally generated revenue of the state government in the coming years. 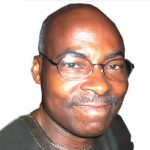 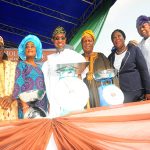