The Emancipation Day Celebration was recently held in  Ghana. Participants for the annual event converged on different parts of the world, especially from America and the Caribbeans .
The activities were held in the cities of Accra and Cape Coast. This year’s programme highlights included wreath-laying ceremonies at  the Du Bois Centre for Pan African Culture,  George Padmore Library and Kwame Nkrumah Park in the heart of Accra.
These three venues are the final resting places of three illustrious sons of Africa and Pan Africanists who lived, dreamt and worked together in Ghana to consolidate and solidify the emancipation, liberation and decolonization of Africa and the black race.
The event was held under the auspices the Ghana Tourism Authority and the Ministry of Tourism Culture and Creative Arts. The Osun State Governor, Ogbeni Rauf Aregbesola,  was the special guest and guest speaker for this year’s edition.
Aregbesola, who arrived Ghana for the event, visited the Nigerian embassy. He later laid a wreath at the George Padmore Library and Kwame Nkrumah Park.

At  the George Padmore Library, Aregbesola  was welcomed by the Minister of Tourism, Culture and Creative Arts, Mrs. Elizabeth Agyari, and other Ghanian government officials. He later  lit the flame of freedom.
Aregbesola also visited the  Nkrumah Park where he gave a short speech.  The Osun State Governor said it was  time for Africa to wake up early because it was getting too late,.
According to him,  Africa lags behind other continents in development. Here, his main focus was on the African youths who engaged in drama and dance rich in  the African culture. After this, the governor and other participants walked into the late Dr. Kwame Nkrumah’s mausoleum.

The mausoleum is one of the top tourist sites in Accra. The interior was made of gold and fine marble befitting the first President of the Republic of Ghana.
There are two statues in the park, the new one made of pure gold is a few metres away from the old one destroyed by soldiers as a result of Ghana’s first  coup d’état.  The destroyed Nkrumah statue broken into two has a story to tell. The bullet marks on the body speak volumes about the violent past of the country.
The second day of the programme was at the former capital of Ghana called Cape Coast, a major tourist destination in Africa, blessed with one of the finest and best beaches around in Africa. It is the home of the famous Elmina Castle. Cape Coast attracts thousands of foreign tourists annually.
At Cape Coast, Aregbesola delivered  an inspiring paper. Decked in all white  agbada attire , he delivered his paper in an auditorium filled to the brim with Africans and African-American audience.
Among them were  Prof. Hamlet Maulana , an  African-American historian; Rabbi- kohain Halevi , the Executive Secretary of Panafest Intternational;  Mama Imahkus Njinga Okofu, CEO of One African Resort and Restaurant and Nana Kobina Nkatsia V, paramount chief of Essikodo.
Mr. Kehinde Oluwafusho, who along with his twin brother, are Panafest representatives in Nigeria, took the stage to introduce the governor of Osun State to the audience, in his words. Kehinde described Ogbeni as a leader of leaders who drives the vision of others, a man of robust ideology, a strong and formidable Pan- Africanist , a strong advocate of the people’s culture who talks Africa, eats Africa  dreams Africa.
Aregbesola, in his paper, took the audience through popular African proverbs, traditional songs, properly interpreted, interjected at intervals. Bob Marley’s freedom song; was interjected into his address. 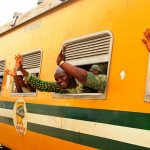