Prominent indigenes of Iwo in Osun State, have called on Governor Rauf Aregbesola to approve the planned conversion of the Reality Television building in the town, to a journalism institute. Elites from the town, including thirty professors and other eminent personalities, recently resolved to appeal to the governor to affiliate the proposed institute to Osun State University when approved. 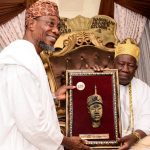