From a global perspective, the girl child is considered vulnerable to several societal ills. This perception is more pronounced in developing countries, where the belief is that there is the need for effective policies to safeguard the girl child from violence, limited access to education, neglect, abuse, gender disparities and other negative trends.
There is a growing concern around the world that urgent actions need to be taken to address these challenges and education and empowerment initiatives have been identified as the needed tools.
In celebrating this year’s International Day of the Girl Child on October 11, the attention of stakeholders from around the world was focused on issues surrounding the girl child. The theme of this year’s celebration was “Girls’ Progress = Goals’ Progress: A Global Girl Data Movement”. This special day was set aside to raise public awareness on girls’ right and highlight gender inequalities that are widespread worldwide.
The latest UN statistics show that there are 1.1 billion girls in the world today. These girls represent an opportunity to shape a sustainable world that’s better for everyone. However, their dreams and potentials are often thwarted by lack of opportunities and discrimination.
Like other developing countries, the girl child in Nigeria is not immune to these challenges. A peculiar case is that of the 276 girls kidnapped in a school in Chibok, Borno state. The negative experiences of these girls have become a rallying point for the challenges faced by the girl child worldwide.
The day also helped reveal the efforts made by governments at various levels to educate and empower the girl child. Worthy of note are those undertaken by Osun state.
Before Ogbeni Rauf Aregbesola assumed office on November 27, 2010, the public education system was in a bad state such that only students whose parent couldn’t afford private schools were left in public schools.
Facilities of these public schools were not only dilapidated, students’ performance in both internal and external exams were at an all-time low with tuition fees in the state owned tertiary institution outrageous.
The situation has however taken a positive turn since the advent of his administration. The government has also placed priority on girl child education. Presently in the state, there are 622,726 students between the elementary, middle and high school. Of these number, 309,488 are females and 313,238 are males.  This is a laudable achievement that dwarfs the average expectation for developing nations.

Infographic showing the distribution of male and female students In Osun State.
The governor restructured the education system into elementary, middle and high school structure. He also constructed 100 Elementary, 50 Middle, and 20 High Schools during his first term through the O’School programme.
He also focused on improving the nutrition of students in public schools by introducing the school feeding programme, O’Meals in line with the UN recommendation. The government believes a well-fed pupil will be more attentive in class compared to a hungry pupil.
It’s no surprise that the programme has recorded success stories with the school enrollment increasing by 25% spread over 38,000 pupils within four weeks of its introduction. 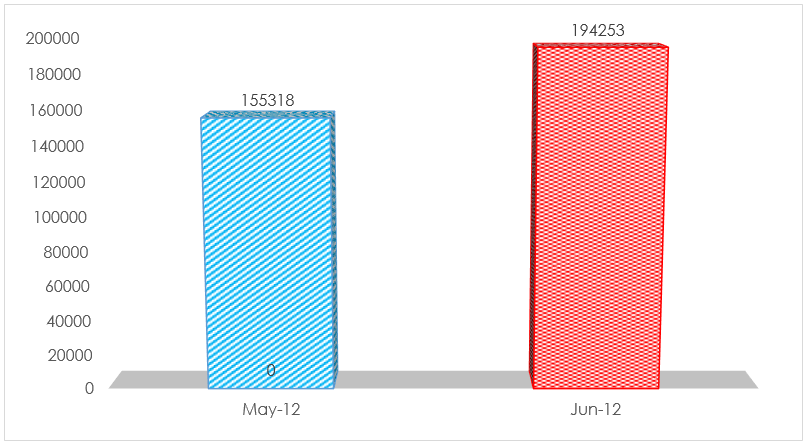 Graph showing the increase in school enrollment from May to June, 2012
Apart from education, O’Meals programme has also helped economically, improving the production capacities of farmers and empowering 3,007 women appointed as food vendors to serve pupils on school days. It is noteworthy that the Aregbesola-led administration spends N3billion naira per annum to feed primary 1 – 4 pupils in all the public primary schools in the State of Osun. 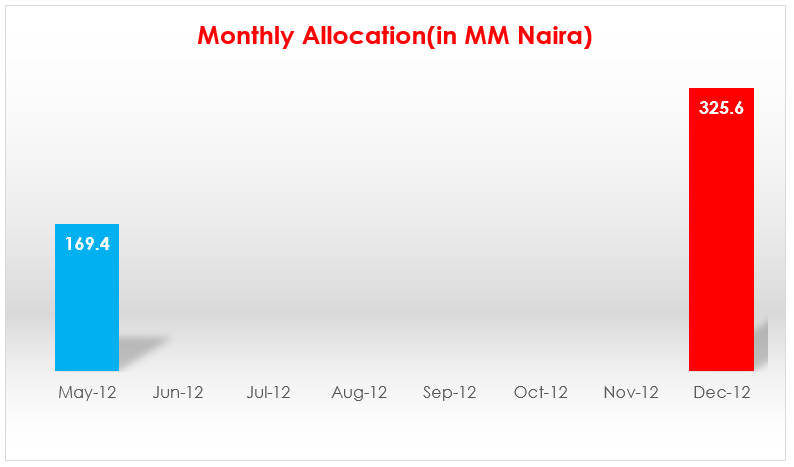 Graph showing the monthly increase in allocation for the O’Meals Programme in Osun State
Of the 13 states that started the feeding programme, only the State of Osun is still implementing the School Feeding Programme.
Osun State recorded an outstanding feat in its quest to promote education by sponsoring 5 outstanding female students in an exchange program in the United States. The program is in partnership with an NGO AWOW International Girls Leadership Initiative, which empowers and offers skills and professional mentorship to young women.
The 5 girls will attend the annual AWOW Summit & College Tour Leadership Forum for young women, scheduled to hold at the Southern Methodist University, Dallas, Texas, United State, with the theme ” Leading the Future.”
Not only will the summit enable the girls to share experiences and knowledge through the cultural exchange, the girls would also have opportunity of scholarship for University Education in the USA.
Statistics show that when 10% more girls go to school, a country’s GDP increases by 3% on the average and a child born to a literate mother is 50% more likely to survive past the age of five.
Governor Aregbesola while speaking on government’s commitment to education development, said: “This is the continuation of our commitment to standard education. To us, education remains our priority and as a matter of fact, this government has invested hugely on this.”
He also stressed the importance of bridging the gap between public and private schools as a means of preparing the nation for good leadership in the future.
The UN explained that girls’ education is both an intrinsic right and critical in reaching other development objectives. Educating girls can help break the cycle of poverty.
Girls’ education is essential in achieving quality learning relevant to the 21st century, including girls’ transition to and performance in secondary school and beyond. Adolescent girls that attend school delay marriage and childbearing, are less vulnerable to disease including HIV and AIDS, and acquire information and skills that lead to increased earning power. Evidence shows that the return to a year of secondary education for girls correlates to a 25 per cent increase in wages later in life, the UN said. 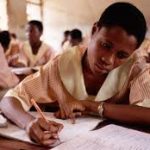