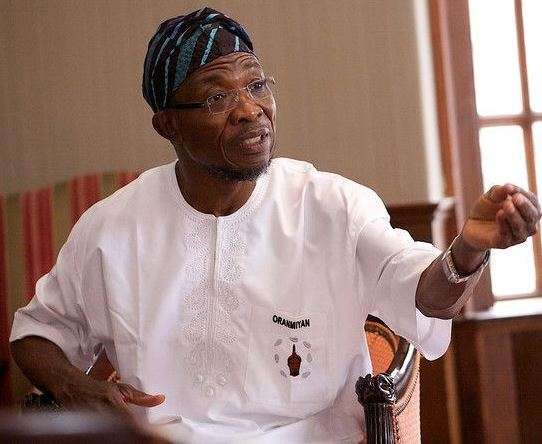 The state Government of Osun on Thursday denounced the rumours making the round that the current administration has concluded plans to tactically retrench workers in the state through compulsory leave order given recently.

The government said the order was necessary in view of the constitutional rights of every worker to benefit leave yearly as enshrined in the civil service rules.
The State Governor, Ogbeni Rauf Aregbesola debunked the rumours while addressing people during the official commissioning of a new secretariat complex of Iwo East Local Council Development Area, LCDA, built and donated for use by a prominent indigene of the new LCDA, Chief Abiola Ogundokun.
Aregbesola, who described workers in the state as the life-wire of socio-economic development, said on no account has his administration contemplated reducing the workforce.
He said the move was not meant to either hurt or dehumanize any worker but rather to strengthen the laid down civil service rules in a bid to enhance greater productivity and effectiveness.
Aregbesola reaffirmed that in spite the effects of the current economic recession, the state under his watch would not for any reason depopulate workforce in the state.
According to him, the decision was reached having been informed of the accumulated leave of some of the top officials in the state civil service.
He said the state has been working round the clock to fix the economy through diversification so as to further ensure stability in governance.
“It is disheartening that some people have become perpetual rumour peddlers. They never live by the truth but rather deriving pleasure from spreading propaganda and falsehood.
“Our administration has never intended to sack any worker. We never aimed to retrench or reduce workforce. This is what we built and we can never collapse it.
“Our directive on compulsory leave was in line with the operational framework that established civil service. We only enforced it because we felt that those affected were due for leave.
“As we all know, leave is a work-relief benefit for workers and it is expected of every worker that is due for it to do so.
“In view of this, our government’s action was aimed at ensuring that those workers benefit from their accumulated leave from 2014 till date.
“We are not sacking any worker under pretense as being rumoured but rather enforcing the conventional rules and civil service principles.
Aregbesola warned disgruntled politicians to do away with propaganda, falsehood that could bring about disaffection in the state.
He also called on the opposition to always help government with constructive criticisms that can ginger government towards perfection.
“We shall remain focused in all our developmental and life-transforming programmes to ensure that we produce man that would be useful not only for himself or family but for the state and country at large.
“Our government is moving towards socio-economic prosperity and democratic stability that favours all-round transformation, growth and development.
He commended Ogundokun for donating the administrative building, saying the gestures would go a long way to further strengthen affinity and intimacy between the people and government at the grassroots.
He said the new LCDAs were created to protect the general interests of the people by making government more closer to them.
Earlier, the donor, commended the state government for creating additional local government areas in line with the wishes of the people.
Ogundokun called on the communities where the new councils are located to take good advantage of them.
He said, “I appreciate the state government under the able leadership of Governor Rauf Aregbesola for working assiduously towards ensuring speedy and even development of all parts of the state.
“Aregbesola is doing his best humanly possible even at this time when it requires ingenious and creative capacity for a courageous and visionary leadership to deliver good results because of the tough and hostile economic climate foisted on us by unpredictable factors.
“Governor Aregbesola deserves commendation for initiating and executing series of capital projects, despite serious economic recession.
“I have personally monitored these projects and my conclusion is that the projects have the potency of laying a solid foundation for future development of our state.
The Oluwo of Iwo, Oba Rasheed Adewake Akanbi, also commended Governor Aregbesola for his landmark projects while also lauding Ogundokun for his selfless service to the community.