The Justice Moshood Adeigbe-led Commission of Inquiry On Disturbance of Public Peace today inspected the palace of the Ataoja of Osogbo as requested by counsel to the traditional ruler.
Mr Adesina, at the last sitting of the panel requested that one of the evidences submitted to the panel by him (exhibit GAAC18) which is a list of Osogbo District Council members from 1954/58 be verified by the panel.
It would be recalled that the Commission adjourned sitting till today for inspection of the panel.
The three Baloguns, Kujenyo, Fagbemi/Biiro and Balogun Agoro, had dragged the monarch and six others before the panel, claiming that only their compounds are entitled to the Chieftaincy titles of Balogun and Otun Balogun.
The three petitioners also alleged that the lesser chiefs under the Balogun and Otun Balogun chieftaincy titles have just been added to the list of Chiefs by Oba Olanipekun.
The monarch has however dispelled the claims of the petitioners, saying that the lesser Chiefs have been in the Chieftaincy Declaration in 1974 during the reign of Oba Samuel Adenle.
Oba Olanipekun also refuted the allegation by the petitioners that the Chieftaincy Declaration was secretly made by Oba Adenle, saying the late monarch followed the existing law in the declaration.
He explained that the Balogun and Otun Balogun were not the only declaration made at the time, noting that many Chieftaincy declarations were also made.
Other Chieftaincy declarations made, according to Ataoja include: Jagun and Otun-Jagun of Osogbo, Eesa of Osogbo, Akogun of Osogbo, Ataoja of Osogbo, Olufon of Ifon, Olobu of Ilobu, Elerin of Erin-Osun, among others.
The Ataoja also explained that the petitioners have lost in the three judgments of the High court and Appeal court.
He stated that the outcome of the judgment was that the position of Balogun and Otun Balogun were promotional, wondering why the petitioners have chosen to approach the Commission of Inquiry instead of going to the Supreme Court.
Justice Moshood Adeigbe-led panel however adjourned the matter till January 27, 2017 for further hearing. 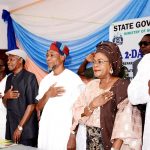