Why Agriculture Remains Our Only Panacea to Economic Recovery- Aregbesola

Nigeria’s enduring economic recovery will only materialize only when the country revitalizes her investments in agriculture and make it a venture that attracts the bulk of the most productive segment of the population.

This was the conclusion of the Governor of Osun, Ogbeni Rauf Aregbesola, as he brought together all officials of the state involved in the agriculture sector to further find fresh ways to improve the state’s performance in agricultural investments.
At the interactive session with officials of the State Ministry of Agriculture and it’s agencies, Governor Aregbesola painted a gloomy picture of imminent acute famine and drought the nation may likely face if the heavy reliance on oil continues.
A statement by the Bureau of Communication and Strategy in the Office of the Governor signed by the Director, Mr. Semiu Okanlawon, quoted Governor Aregbesola as saying that the Governor declared that oil can no longer be the economic mainstay of the nation if it plans to exit the recession facing it present.
The Governor charged the agriculture officers in the state to sit up, redouble their efforts and re-dedicate themselves towards the transformation of the dreams of the state from peasant, rural, subsistent agricultural state to a modern, industrial and commercial agricultural state.
Aregbesola said, “At this critical juncture and judging from the economic crisis of the present, the country and our state have no alternative than to diversify and stop relying on what comes from Abuja, if we must survive.
“We must forthwith stop importation of food items and start cultivating our own food crops. We have everything we need to be a great agricultural nation. Let us undertake a survey to know where each state has comparative advantage over others.
“Our Ministry of Agriculture and its agencies must put their acts together and go back to massive agricultural practice and production.
“The situation at present requires that we do everything humanly possible to awaken the huge potentiality of our agricultural sector.
“Failure to do this leaves us with only two alternatives. It is either we float or sink, but in our state, we shall float because our administration is determined to leave no stone unturned this time around at ensuring general wellbeing of its citizenry in making the state food basket of the nation.”
Aregbesola was quoted further as noting that unless the nation and the state plunge their resources and energies towards agriculture, millions of people, particularly children, will face serious hunger.
He stated that only agriculture can rescue the nation from the nationwide and global economic meltdown currently being experienced arising from the oil glut and the activities of the Niger Delta militants.
Governor Aregbesola said that the only panacea to the current economic imbroglio is for every serious minded government to rise to the occasion and look for alternative means by exploring the abundant potentialities in agriculture.
The governor said with less than two years to the end of his administration, he would not relent in his bid to turn around the sector so that there would be food security . 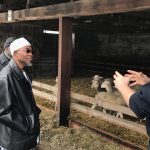