Osun State government has expressed confidence in the governing council and workers of the Ladoke Akintola University of Technology, (LAUTECH), Ogbomoso, following the payment of three-month salaries and subsequent suspension of strike by the Academic Staff Union of Universities (ASUU) of the institution.

According to Osun government, the payment of the three-month salaries was an indication that the council and the two owner state governments, Osun and Oyo are committed to the smooth running of all activities in the university. Governor Ogbeni Rauf Aregbesola of Osun.

The state government in a press release by the Commissioner for Information and Strategy, Mr Adelani Baderinwa, on Tuesday said the resumption of the LAUTECH workers and academic normalcy is important to the owner governments, as they were concerned about the plight of the students.

Baderinwa maintained that the two owner state governments are so much concerned about the well being of the students as well as the progress and development of LAUTECH and the welfare of its workers with mutual understanding.

He said: “Governor Rauf Aregbesola of Osun and Oyo State Governor, Abiola Ajimobi were very sensitive about LAUTECH matter and they have exhibited reasonable and convincing commitment to the welfare of the workers of the institution and the plight of the students.

“It would be recalled that the Osun government recently released a sum of N1bn to the university. “Notwithstanding pressures from some quarters that Osun government should not commit the state resources to LAUTECH again due to obvious marginalization of the state in LAUTECH, Governor Aregbesola who is passionate about functional education, a team player and a goal getter will not cease in funding LAUTECH and will stop at nothing in ensuring that LAUTECH is back on its feet.

“The basis of agitation of Osun people is that Oyo indigenes in the employment of LAUTECH are about thrice that of Osun while only one faculty in the institution is located in Osun as against the seven faculties located in Oyo despite the equality in funding by the two states.

“All stakeholders are called upon to be sensitive to their responsibilities and join the two owner governments, and especially Governor Aregbesola who went out of his way to provide promptly, not minding the dearth of fund facing Osun  and loud protestations of inequality in the partnership, what was agreed to  in rebuilding the institution and ensuring the resumption of LAUTECH workers.

“There is no any other way to express sensitivity and commitment to the progress of the institution, the welfare of its workers and the plight of the students.”

Baderinwa urged LAUTECH labour unions to continue to cooperate with the council in ensuring that the institution is fully back on track. 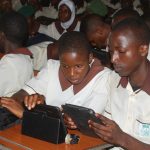