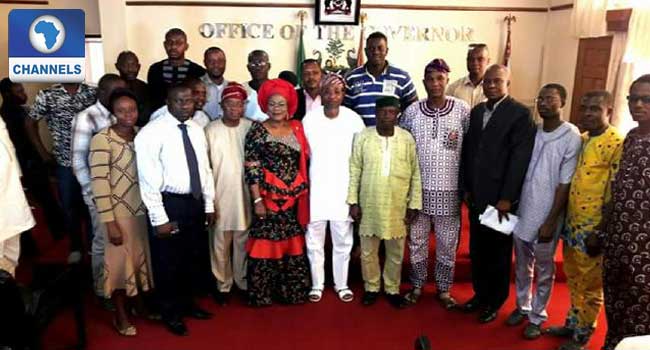 Aregbesola tasked the journalists to be more active in sports reportage by asking questions when necessary.
Aregbesola said the honour and investiture was more of an assignment and said he was willing to take up the position and challenges attached.
“I am willing to be the grand patron of your association, though the economic situation now in the country is not palatable, I will play my part to support the association.
“Count me as a worthy member of the association because I will do everything I can to support you.” he said
He said sports could be used as a means of promoting social development and engagement, and tasked sport writers to contribute more as a tool of restructuring the society.
He reinstated his administration’s commitment to sporting activities like calisthenics in public and private schools in the state and the re-commencement of the “Walk to Live” programme.Osun SWAN Inducts Gov. Aregbesola As Grand Patron
Speaking at the investiture at the Governor’s office, Abeere, the state chairman of
SWAN, Mr Adeyemi Aboderin, said that the Governor was being honoured and inducted, as recognition of his numerous contributions to the development of sports and healthy living in the state.
Aboderin described Aregbesola as the best sports loving governor in the country.
According to Aboderin, the tradition was that a performing governor should be inducted as Grand Patron of SWAN and that the governor would be the first beneficiary of such an honour in the history of the state.
He said the synergy created by this investiture means that a stronger relationship would be formed between the state SWAN and state government, which would create possible ways of moving sports forward in the state.
Speaking at the induction event, the National President of SWAN, Mr Honour Sirawoo, who was represented by the South-West Vice President of SWAN, Mr Boye Ajayi, said that the association was proud to have the Governor as the grand patron of the association in the state.
He said the Governor was being appreciated as a performing sports governor. He congratulated and also thanked him for taking up the role and position.
He said the association was waxing stronger in the state and stated that having the governor as the grand patron would boost the association’s strength.
The highlight of the event was the presentation of a plaque and medal by the National President and State Chairmen of SWAN to the Governor as the association’s state grand patron. 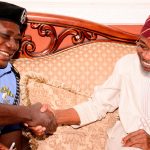