Governor of Osun, Ogbeni Rauf Aregbesola on Tuesday described the actions of the hoodlums who set ablaze the state High Court in Ilesa as a major assault on civilization.
The Governor stated this during an on-the-spot assessment of the premises of the high court which was allegedly set ablaze by hoodlums on Monday morning.
Aregbesola, who went round the facility in company with the state Chief Judge Justice Adebola Adepele Ojo stressed that an attack on the judiciary is a direct attack on the civilisation of the people.
He said, “The fulcrum of human civilization is based on two things: the maintenance of law and order and secondly the upholding of justice and truth.
“Where law and order can not be guaranteed, when the instruments of justice can not be guaranteed, what you have is chaos and anarchy. Our government will not allow this to happen.
“This attack is a major assault on the civilisation of the land because when you attack the major instrument of justice then you are also attacking the common man on the street.
“As a government we are very dissappointed that this has happened” Aregbesola said.
The Governor, who promised that everything will be done to ensure that the perpetrators of the dastardly act are brought to book, hinted that the state Commissioner of Police has been charged to apprehend those involved as quickly as possible.
Governor Aregbesola, who noted that the vandalised court calls for urgent rehabilitation stated that the high court in Ilesa and others across the state will be given urgent attention in terms of rehabilitation and security.
The Governor, during the inspection, also sympathized with of one of the securitymen of the premises, Mr. Olanrewaju Owoeye, who was beaten up and wounded by the hoodlums during the attack.
Sections of the court which was inspected by the Governor include the Registry, Library l, the Secretary’s Office among others. 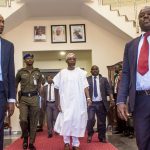 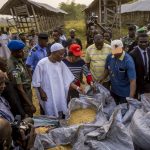