The Governor of Osun, Ogbeni Rauf Aregbesola, has described as a Patriot, the former Military Governor of the defunct Western Region, General Adeyinka Adebayo (rtd) who passed on on Wednesday.
Aregbesola joined well-meaning Nigerians in commiserating with the family of former Military Governor of Western Region and President of the socio-political group, Yoruba Council of Elders.
The Governor, in a statement by the Director, Bureau of Communication and Strategy, Office of the Governor, Mr. Semiu Okanlawon, said the death of General Adeyinka Adebayo has robbed Nigeria, especially the Yoruba race, of an elder statesman.
“General Adeyinka Adebayo served his fatherland well. He was a fine officer of the Nigerian Army and did his best in all the capacities where he served. The history of our country is incomplete with adequate mention of this fine officer,” the statement noted.
Recalling Adebayo’s interests in the growth and the development of the Yoruba race, Aregbesola said the former President of the YCE stopped at nothing to ensure the unity and progress of the Yoruba people.
“We receive with heavy heart the death of one of Nigeria’s finest officers of the Nigerian Army, who fought for the unity of nation.
“No doubt, he is a soldier of repute and commander of men. He distinguished himself in his chosen profession both at home and abroad.
“The history of post-independence Nigeria and the crises that threatened the young nation’s existence will be incomplete without a chapter for this courageous soldier,” Aregbesola said. 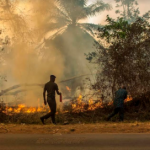