Police in Osun State said about 26 persons have been rescued from what it described as, “strange mental home” in Iwo area of the state.
The Commissioner of Police, CP, Olafimihan Adeoye, disclosed this, noting that the 26 victims had been taken to hospital for medical attention, and added that three of them had died.

Adeoye made the disclosure while briefing newsmen yesterday in Osogbo.
According to him, the victims were dehumanised under the guise of receiving treatment for mental illness.
He said four persons connected with running of the home had been arrested.
He said, “At about 16.00 hours on Thursday, we received information of the existence of a camp in Iwo, where some sick persons were being treated in a dehumanised manner.

“On receiving the information, we contacted the necessary agencies of government to join us to visit the place and arrested four persons who are currently undergoing interrogation.
“About 26 fellows were found in the camp and had been taken to the hospital for necessary medical care.
“We also discovered that two of them have passed on just yesterday; I have just been informed that when conveying them to the hospital, another one gave up the ghost.
“So, we now have three of them that are dead. But, we hope that further investigation will reveal some other things.”
The CP further assured that investigations would be carried out with the view of determining the culpability of those involved in setting up the camp.

He added, “For now, the state government has taken up the responsibility to ensure that those rescued are effectively taken care of.”
Meanwhile, the suspected owner of the camp, Kamardeen Akanmu, claimed the home was a ‘spiritual healing centre’ for mentally challenged persons.
Akanmu, who spoke to journalists in Yoruba language shortly after his arrest, said that some of the victims had died and buried in the camp with the consent of their families. 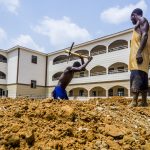