Spectators were treated to the best of table tennis on Thursday at the banquet hall of the Government House as the table tennis competition organised in commemoration of the 60th birthday of Governor Rauf Aregbesola entered Day 2.
It was a keenly contested affair between players in Group H, Group E and Group C as they all contested for spots in the quarter-final of the competition.
The first game of the day saw Kamarudeen Arogundade brushing aside Kolawole Gboyega by three straight sets, just as he went ahead to beat Kingsley Omoyeni and Akinloye Akinbami by the same margin.
The trio of Kingsley Omoyeni, Akinloye Akinbami and Kolawole Adegboyega all defeated one another in a round rubbing affair.
Kamarudeen Arogundade and Kingsley Omoyeni then qualified for the next stage of the competition.
In other groups, Kunle Owolabi and Kunle Alabi emerged as the next round contestants from Group E after both of them defeated Adebayo Olakunle in three straight sets.
In Group C, which was the last for the day, Sola Fasure brushed off the trio of Gbenga Azeez, Gbenga Odesanmi and Abiodun Idowu to emerge as the group winner, while Gbenga Azeez came second in the group.
The competition continues on Friday with games in Group D, which will see Rasheed Mabayoje, Taye Lawal, John Tom and Taofeek Masha lock horns.
Saturday will be the turn of Group G, which has the Speaker of the state House of Assembly, Rt.Hon Najeem Salaam.
Officials at the table tennis competition are the table tennis Chief Coach from the State Sports Council, Biodun Soyemi, as well as his Assistant, Suraju Saka. 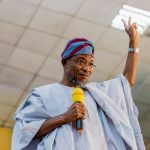 Aregbesola Says Osun APC is Not in Disarray Over 2018May 15, 2017
Osun Delivers Nigeria’s Only World Class Mechatronics Institute – The BimiMay 16, 2017 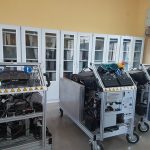