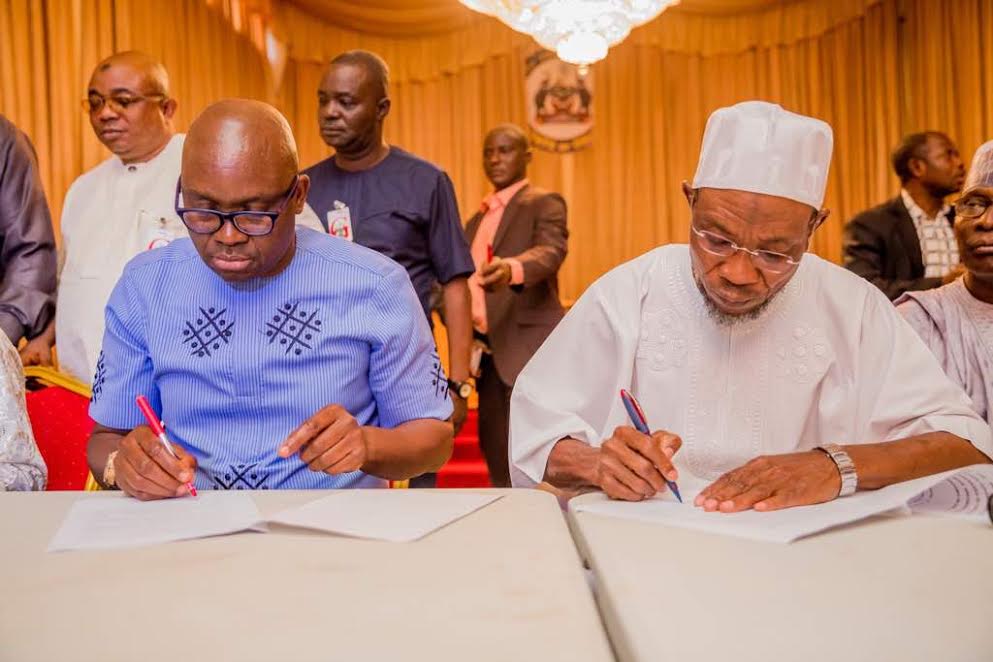 The Governor of Osun, Ogbeni Rauf Aregbesola on Sunday succeeded in breaking  the ice of hostilities between his Ekiti State counterpart, Ayo Fayose and oil marketers who had been at loggerheads over the siting of some filling stations in the state.

The Ekiti State Governor commended the swift intervention of the Governor of Osun in resolving the lingering crisis which had led to acute scarcity of oil products in the state.
The truce reached on the intervention of Aregbesola led to the end of the three week old industrial action embarked upon by the Nigeria Union of Petroleum and Natural Gas Workers (NUPENG).
NUPENG suspended the strike with immediate effect.‎
Fayose, in his remarks shortly after the communique was read and signed by parties involved, said the purpose of coming down to Osun to resolve the matter was to let the world know that the Yoruba nation can take care of its affairs.
He said the existing unity among the Yoruba has got to the extent that issues can be resolved in any part of the region be it Osun, Ekiti, Oyo, Ogun, Ondo and Lagos states.
Fayose said the idea was to further strengthen the existing unity and love among the leadership of the region regardless of political ideology.
According to him, resolving the matter in Osun was a clear demonstration that Yoruba people are one.
“I appreciate Governor Rauf Aregbesola of Osun for this peace process that we have been able to achieve.
“The government and the people of Ekiti state highly appreciate the swift intervention of Osun state government led by Governor Aregbesola.
“This is a manifestation of the spirit of togetherness, love, unity and harmony among the people of this region.
“This is done in the spirit of understanding of Yoruba nation as being demonstrated today that we are one nation and indivisible entity.
“What happened today shows that we have the capacity to resolve issues as states in the region without any external intervention.
“Some people will ask why the Ekiti state government has come to Osun to resolve the matter. But whether is Osun or Ekiti, what is important is that we have resolved the matter and reached a common ground.
“It shows that Yoruba people are one and as well remain indivisible.
“All parties involved have signed a communique and we are going to respect all what is in the communique and we will by the communique just as the committee will be given free hands to work to give a lasting solution to forestall such crisis in the future,” He said.
While reading the communique, the General Secretary, NUPENG Mr. Joseph Ogbebor said the union agreed to suspend the three week strike having reached a common ground with the state government.
Ogbebor reiterated that the two parties have agreed to set up an ad-hoc committee which will after the suspension of the strike oversee the need to find a lasting solution to the crisis.
The communique reads in part: “An ad hoc committee be constituted to fashion out in clear terms the conditions and guidelines for the establishment and operations of filling stations in Ekiti State.
“The committee comprising representatives of Ekiti State Government and oil and gas stakeholders shall commence work on Wednesday 7th June, 2017
“In the spirit of reconciliation, Ekiti State Government agreed to pleas for reversal of the revocation of some Certificates of Occupancy of landed properties on which filling stations are built, except the ones on waterways, canals and where there is no justification for such revocation;
“In that same spirit, the government agreed to stop further demolitions pending the outcome of the committee’s report.
“Consequently, the Nigerian Union of Petroleum and Natural Gas Workers (NUPENG), Independent Petroleum Marketers Association of Nigeria (IPMAN) and other related oil and gas unions hereby suspend the industrial action embarked upon by their members, with immediate effect.
The communique was Signed by: Ekiti State Governor, Dr. Peter Ayodele Fayose, his Osun State counterparts, Ogbeni Rauf Aregbesola,
NUPENG General Secretary, Joseph Ogbebor,
IPMAN Zonal Chairman, Alhaji Debo Ahmed
PTD NUPENG, National Vice Chairman, Comrade Solomon Kilanko
In his remarks, Governor of Osun, Ogbeni Rauf Aregbesola commended the maturity of the leadership of NUPENG and IPMAN exhibited in resolving the crisis between them and the government of Ekiti state.
He expressed profound gratitude and high sense of understanding displayed by the leadership of the Ekiti state oil marketers, saying it has shown that dialogue remains the best method of resolving conflict.
Aregbesola added, “Since this matter has been resolved, I am happy that this brings a permanent peaceful coexistence between the two parties in the state.
“It is believed that this resolution will bring an everlasting and evergreen cordial relationship between and the unions.”‎ 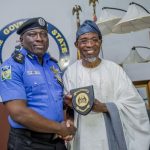