The state of Osun House of Assembly has directed the Management of Ibadan Electricity Distribution Company (IBEDC) to restore power to parts of Osogbo, Olorunda as well as Egbedore Local Government which have been in darkness for over a month to revive business activities in the affected areas.
The directive was given during a house session with the management of IBEDC and affected communities at the floor of Assembly complex in Osogbo.
Speaker State of Osun House of Assembly,  Honourable Najeem Salaam,  frowned at the service of IBEDC Osogbo which he said has wrecked havoc on the peoples’ welfare.
He lamented the power outage in some places which encourages crimes in the affected communities in the state.
It would be recalled that the State House of Assembly had last week directed the management Ibadan Electricity Distribution Company (IBEDC) to appear before it to defend their position in respect of the blackout in some part of Osogbo, Olorunda and Egbedore local governments in the state respectively.
According to the speaker “we remain the voice of voiceless, if House of Assembly cannot do this for the people who else can do it.
We want our people to live safely and comfortable and we cannot fold our arms for electricity users to suffer”, he added.
He charged the security agencies in the State to put adequate measures in place to secure the entire hide outs in the state for the safety of dwellers of the communities.
In their separate remarks, the lawmakers lamented series of difficulties encountered by their constituencies from IBEDC services.
They all alleged that the company services were nothing to write about describing the company’s attitude as “taking the communities for granted.”
The parliamentarian also charged the IBEDC management to make sure electricity is restored to the affected communities in the state within three weeks to enhance commercial activities.
Also, the lawmakers advised the IBEDC to work on weak transmission cable across the state to guarantee uninterrupted power supply.
Meanwhile, in their responses, the company’s Regional Technical Manager, Engr. Salami Waheed and Business Manager Engr. Ogunleye Kazeem appealed to the whole House and numerous customers affected by the blackout claiming that the situation was beyond their control.
According to the officials, the epileptic power supply was as a result of overloading of feeders and weak transmission conductors.
According to them, “It is not our intention to put people in darkness for long”. 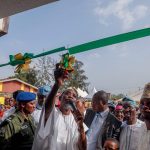