News
Home News Osun Students Will Be The Best In The Country – Gov. Aregbesola
News

Osun Students Will Be The Best In The Country – Gov. Aregbesola

As part of efforts aimed at promoting functional education in the state of Osun, Governor of the state today kicked off the annual distribution of instructional materials to pupils of public schools across the state.
Instructional materials such as exercise books, textbooks for students in the middle school, chalk, first aid kits where among other materials which the state government has put together for distribution to public schools in the state.
Speaking at the event held at the hall of the Local Government Service Commission, government secretariat, Abere, Governor of the state of Osun, Ogbeni Rauf Aregbesola said the gesture is aimed at making the students in the state champions in their rights stressing that the aim of the government is to make Osun students the best in the country.
Aregbesola who said education is what the young ones need to define their position in life without which they cannot be the best in whatever they lay their hands upon advised the students to embrace what he government is doing in the sector as it will make them stand out in future.
He explained that it is the intention of the state to be the best in Nigeria therefore students of the state of Osun should be prepared to assume the position of ambassadors of the state as they are the future of the state.
While urging the students to take full advantage of the intervention of the present administration in the education sector, the Governor said that it will be a failure if the students fail to take full advantage of the opportunities presented to them.
Urging the students to shun acts violence, Ogbeni Aregbesola said the various reforms is aimed at making them have functional educational education which will enable them to be virtuous people stressing that virtuous people commands respect, honour and popularity.
Earlier in a welcome remark, the state Deputy Governor who also doubles as the Commissioner for Education in the state, Mrs Grace Titi Laoye Tomori said the decision to give instructional materials to schools every year is born out of the administration’s policy on education.
While thanking the Governor for sticking to his electioneering promises of providing functional education, Mrs Tomori enjoined teachers of public schools to ensure that the materials are properly utilised for the purpose for which they have been provide and also ensure that they are well taken care of.
Highlights of the occasion was the symbolic distribution of the materials to some students of the public schools who were part of the occasion.
BIOREPORTS
43 Views
1 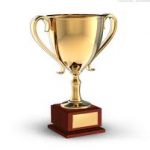