Why We Won’t Use Card Readers in Ekiti, Osun – Jega

The chairman, Independent National Electoral Commission (INEC), Prof. Attahiru Jega, yesterday advanced reasons why the commission will not use card readers in the governorship elections in Ekiti and Osun states.
In another development, INEC, in its bid to bridge the increasing gender gap and promote mutual partnerships between men and women in the operations of the Commission and its relation with relevant stakeholders, said it was working assiduously towards articulating a proper framework for mainstreaming gender through its gender policy.
Jega, who received the United States (US) Under Secretary of State for Civilian Security, Democracy, and Human Rights, Sarah, in Abuja, explained that the interest generated by both elections would not allow  for it to be used for the pilot scheme.
Ekiti State governor, Dr Kayode Fayemi and his Osun State counterpart, Ogbeni Rauf Aregbesola, had, at a fund raising dinner recently, called on INEC to rescind its decision not to use Voter Card Reader machines in the forthcoming Ekiti and Osun states  governorship elections.
But Jega said: “It will not be wise to use a pilot scheme in an election that will be keenly contested.”
He also noted that in the next three month, the commission would have been done with Permanent Voter Cards (PVC) distribution.
The INEC boss, however, gave the assurance that the commission was fully prepared to conduct free, fair and acceptable election in 2015, saying INEC was now prepared technically and in terms of personnel for the forthcoming elections.
LEADERSHIP 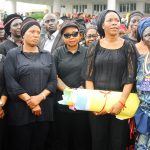