Government of Osun State, Governor Rauf Aregbesola,  has indicated its determination to construct an International Modern Market in Owena, a border town with Ondo State, saying the project would be constructed during second term of the governor who is currently campaigning for reelection.
The Chairman, All Progressive Congress (APC) Governorship Campaign Committee in Ijesa North Federal Constituency, Wale Bolorunduro, stated this in Owena, while addressing the mammoth crowd of Governor Rauf Aregbesola supporters at a campaign rally.
He also said that a water project has been started in the area and would be completed during the second term of Aregbesola administration.
Bolorunduro who also said that Ikeji-Ile to Ikeji-Arakeji road has been awarded added that the ongoing Power Project in Ikeji-Ile would be completed during the second term of the administration.
Identifying building of new schools, construction of roads among others as part of the developments that have been brought to the federal constituency, he urged the people to re-elect Aregbesola to allow him complete all the ongoing projects.
Also speaking, the Secretary of the Campaign Committee, Mr. Olatunbosun Oyintiloye said the support that Aregbesola has received in his outings have shown that he is loved by the people of the state.
According to him, the passion and vision for the development of the state has always been the driving force, saying that his second term in office would enable to compliment on the development he had brought into the state.
He then charged on the electorate to vote massively for Aregbesola and defend their votes with a view to preventing rigging that has are being planned by the opposition party.
Oyintiloye also alerted the electorate about the lies being spread by the Peoples Democratic Party (PDP) about Aregbesola and his candidate, saying, the lies are meant to confuse the people of the state.
He said that the project was part of the programmes being executed by APC-led government, saying that when the projects is completed, the people of the area and its environ would no longer have challenges of portable water.
THISDAY
193 Views
11
Osun Indigenes In Tertiary Institutions Advised To Participate In Scholarship Award Interview.June 26, 2014
Aregbesola Wants All Osun Roads To Be Motor-ableJune 26, 2014 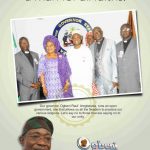