Why We Have Not Had A Credible Election – AREGBESOLA

GOVERNOR Rauf Aregbesola of Osun State yesterday said non-adherence to the provisions of the electoral laws was one of the major problems militating against free, fair and credible elections in Nigeria.

The Governor spoke in Osogbo while declaring open the 2014 Law Week of the Osogbo branch of the Nigeria Bar Association, NBA.

Represented by Attorney General and Commissioner for Justice, Mr. Wale Afolabi, the governor said “if elections are conducted in line with the letters and spirit of the Electoral laws, succession will be fairly smooth and devoid of the reprehensible shenanigans that defined elections of recent past. Elections in Nigeria have been tainted with bizarre, irregularities and perplexing riggings, all because the laws guiding their conducts are being undermined.

“As states and the entire country get ready for another round of elections, I encourage lawyers to mount serious campaigns for observance of the Electoral Laws. I call on lawyers not to be tired of preaching the gospel of the rule of law. You must challenge any contravention of the scared dictates of the rule of law, for it poses serious danger to constitutional governance.

“As people tasked with defending the cause of justice, you must not leave Nigeria in the lurch. Necessity is laid upon you to intervene from time to time in ensuring that the managers of the country conform adequately to the enunciated positions of the law.

“As a major bloc in the camp of watchdogs of democracy and good governance, Lawyers must, with all the influence they can command, be a vanguard of this campaign for the observance of the rule of law. The Nigerian electorates too have a role to play in ensuring that constitutional governance not only becomes stable but also sustainable.” 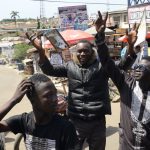