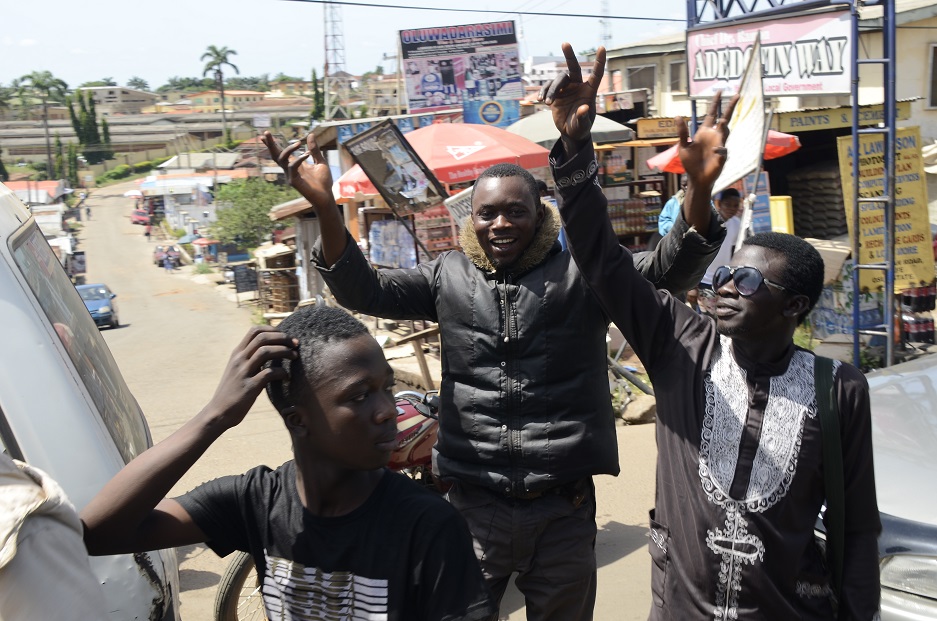 Analysts point out that the aging population is constantly grappling with health issues, economic stress, family matters, uncertain living arrangements, gender disparities, urban-rural differences, displacement and slum-like living conditions. Years ago, traditional values and religious beliefs were quite supportive of elderly people. Today, economic hardship and the faltering nuclear family system are drastically eroding the support base of aged people.
Experts have expressed the need for review of the area of social assistance and the treatment of vulnerable groups nation-wide as well as to develop appropriate plans to transform the management and provision of services to these groups.  There is growing interest on issues affecting the youth and elderly people within the informal economy.
In this regard, Governor Rauf Aregbesola of Osun State has established so many social protection platforms.
One of these is Osun Youth Empowerment Scheme (O’YES) cadets which is a revolving volunteer scheme designed to eliminate the frustration and paralysing effect of high and seemingly intractable youth unemployment pervasive in the state and country at large.
It aims at equipping as many young men and women with positive work ethics and culture, self sustenance, resourcefulness and respect for the environment. It is designed to develop youths with character and competence.
OYES corps are deployed to productive services in identified areas of socio-economic life and paid a basic allowance to help cover basic needs. They are also kitted for group identity and high morale.
Governor Aregbesola announced recently that the State Government had been committing about N200 million to pay allowances for the over 20,000 youths engaged in the Osun Youth Empowerment Scheme (O’YES).
The governor remarked that the success of the programme attracted the attention of the World Bank, which studied it and certified it to be a viable and sustainable solution to the problem of youth unemployment in Nigeria and consequently recommended it to the Federal Government and other states in the country.
The result, the governor said, is the Youth Employment and Social Support Operation (YESSO) that was launched in Abuja.
Aregbesola said O’YES has helped the state to manage unemployment rate to a considerable manner, stressing that the National Bureau of Statistics, in its publication rated Osun State to have the least unemployment rate.
According to him, the Federal Government can help in eliminating the scourge of unemployment by matching the states.
“With that, nobody can accuse you of favouring one state over the other. If the state employs or empowers 1,000 let the Federal Government also employ or empower 1,000. If the state can do 10,000 or 100,000 let the Federal Government match it with the same 10,000 or 100,000 and it is easier for Federal Government to do it,” he said.
The governor stated that he is worried by the spate of insecurity in Nigeria, arguing that there can’t be a solution outside providing employment for the youth.
He noted that the energy, vibrancy and creative talents that abound in young people are vital ingredients of development that only need to be properly channelled into productive engagement.
He suggested that youths must be kept positively engaged by any government that is serious about the task of social and economic development.
“Keeping young people meaningfully engaged is not only a sound economic policy; it is a sensible approach to good governance. For no effective or successful governance can take place where there is rampant unemployment among the youth,” he said.
Using his state as an example of government intervention in youth empowerment, Aregbesola said the Osun Youth Empowerment Scheme (O’YES) became a very effective mechanism of massive public sector employment that offered not only income but great hope for the youth that are absorbed into the scheme.
Speaking with our correspondent at the sidelines of a World Bank Training of Trainers on Community-based Targetting in Iloko-Ijesa, the Director-General of Bureau of Social Services (BOSS) and Head, State Operations Co-ordinating Unit for the Youth Empowerment Social Support Operation (YESSO) in Osun, Mr. Femi Ifaturoti said income security is one of the most urgent needs of the nation’s aging population.
The situation, he added, is worsened by absence of effective measures at the national level to cushion people from risks of old age, sickness, disability and  unemployment, among others issues.
Generally, schemes for the poor and vulnerable come with several conditions that are hard to meet. For instance, they are meant for those who are officially listed as living “below the poverty line” (BPL).
Simply identifying the poor and vulnerable households and providing them with cash assistance, the BOSS D-G noted is insufficient to keep families out of poverty, adding that the state has adopted “graduation policies” that help activate the poor to enter into the labour market and other tailor-made social programmes.
The lead trainer and World Bank Sector Leader, Human Development, Prof. Foluso Okumadewa said Nigeria is grappling with problems that result from high youth unemployment, adding that the presence of idle and unemployed youths pose a problem, even as the challenge is huge.
He sees solution coming from Youth Employment and Social Support Operation (YESSO), funded through $300 million assistance by the World Bank.
The project would commence in Cross River, Bauchi, Osun, Ekiti, Niger, Oyo and Kwara states for the Phase one of the community-based system.
THE NATION

Aregbesola Pledges Commitment To DevelopmentJune 5, 2014
Why We Have Not Had A Credible Election – AREGBESOLAJune 5, 2014