Five Heads of Department in the Osun State Judicial Service Commission, JSC, have been presented with vehicles to enhance their operations.

Presenting the vehicles to the officials on behalf of the state government, Osun State Chief Judge, Justice Adepele Ojo, said the gesture was aimed at improving judicial workers operations in the state.

The Chief Registrar of the Osun State High Court, Mr Ayo Oyebiyi, who represented Justice Ojo at the event, held at the premises of the state High Court, Osogbo, said judicial workers must show more commitment to their work in order to promote the course of justice in the state.

He posited that the government’s gesture was aimed at enhancing the performances of judicial workers in the state with a view to promoting their sense of responsibilities.

He also charged them to rededicate themselves and be more loyal to the government in the discharge of their duties.

He advised those who are yet to benefit from the gesture, to continue to work hard and remain dedicated to their jobs, adding that government would continue to reward hard work and commitment to duty.

Speaking on behalf of the beneficiaries, the Principal Registrar in charge of Maintenance Department, Mr Jacob Adeniyi, said “it is the first time in the history of the High Court that new official cars would be handed to heads of various departments.”

He assured the management of their continuous dedication to the work, just as he pledged their unalloyed loyalty to the state government. 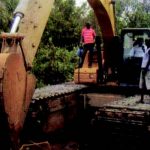