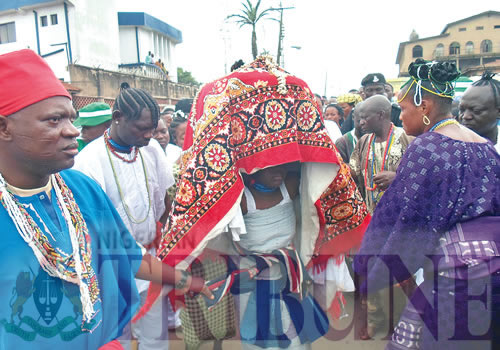 THE success of 2014 Osun Osogbo Festival has confirmed the connection and intensity of the tourism sector to the people and how quickly it can recover in the midst of crisis.

Although, few weeks to the festival, there were releases in the media alerting the public on the Osun State government’s stand on Ebola control, which discouraged non-resident and foreigners and tourists from attending the festival.

However, the festival witnessed slimmer patronage with the absence of the Odu’a among others, but the domestic patronage has shown that it is the people’s festival with the significant number of cultural enthusiasts that converged on the grove for the annual rite to the Osun goddess.

Even with the Ebola scare, the festival also recorded a marginal influx of foreign tourists and Osun devotees from Brazil and visitors from within Nigeria.

Many believed that the ingenuity of the age-long festival of the people has become a point of reference and nothing can disrupt it because of the norms, value and heritage it holds to their existence while others said the degree of campaign mechanism at mobilising rather than discouraging people, put together by the organisers paid off at the end.

Notwithstanding, the festival started on a good note with the votary maid setting out the procession at about 10:00am to the Ojubo Osun (Osun shrine) at the grove.

In earnest, the procession progresses with a good outing and attracted spectacle and admiration from devotees, tourists and visitors who thronged the grove in their numbers.

Restriction of visitors did not change our patronage —Fakeye

Mrs Olaleke Fakeye, the Regional Trade Marketer for MTN, South-West said that there was no regret despite the restriction of visitors to this year’s Osun osogbo festival.

According to Fakeye, “MTN never regretted collaborating with the organisers and the government of Osun State in hosting the annual festival because not only help to reach our subscribers, but also created a rallying point to celebrate the people’s heritage.

“We witnessed a larger crowd in our MTN stage. I think it was quite successful, “ Fakeye said.

She added that they have been partnering with Osun government for over eight years and there was not much difference in their sales this year when compared with the previous year 2013.

Mrs Nike Okundaye, the founder of Nike Art Gallery, said that this year’s festival was memorable as there was no record of casualties throughout the celebration.

Okundaye, however commended the security operatives at this year’s edition of the Osun Osogbo festival for not only being around, but also giving maximum security to visitors. According to her, “The crowd was not much and the security agencies did a good job.”

Speaking on tourist patronage, Okundaye said, “My products were patronised by few people, but the patronage was not like the previous year.

“We hope next year’s edition (2015) will be much better than this year as we pray for better things ahead, “Okundaye said.

We have cultural ties with Nigeria —Brazilian tourists

Oliveira who led a Brazilian delegation to the Osun Osogbo festival despite the Ebola scare said that Brazil has similar culture with Nigeria, adding that their traditional way of worship is not different from the Yoruba traditions.

“We eat, dance and worship the same way Yoruba people do and most of us are traditional worshippers,” Oliveira said.

The director said that the origin of some of the Brazilians is from Oduduwa, the forefather of Yoruba land in Ile-Ife, Osun State.

“I believe that majority of Brazilians are not foreigners, but Nigerians. You can trace our origin to be from Ile-Ife.

“ Brazilians believe that we are Yorubas and not foreigners by history since our forefathers were enslaved to the foreign country where they eventually married white men and gave birth to us.

Oliveira said that in some part of Brazil they still worship Sango, Obantala, Sopona, Oya, Ogun and Irumole.

“These are the things they left behind for us to worship, and would continue to be a generation thing because it was what our forbearers identified with and transferred to us. “ he said.

“We share the same blood, traditions, norms and culture, so Nigerians and Brazilians are brothers and sisters.

“That is the more reason why we do attend the Osun Osogbo festival in order to embrace our cultural heritage and traditions of our forefathers,” he said.

The Osun Commissioner for Tourism and Culture, Mr Sikiru Ayedun, last Thursday said that the hospitality industry in the city lost huge patronage to Ebola scare in the country.

Ayedun added that it was not only hospitality industry that was affected, adding that the commercial buses and drivers, arts and crafts sellers, food vendors, motor bicycle operators, business women and men were all affected.

“Visitors should not take offense of that action, the government needs to do that for the safety of the indigent,” Ayedun said.

“As we are aware, Ebola is a disease that is common in the society now. It requires adequate attention to control it and the safety of our citizens matters most to us, therefore, we need to control the influx of visitors coming into the state.

He said Osun state ministry of health had embarked on sensitisation awareness and campaign on how to curtail ebola in the state.

“In 2015, the hospitality industry will enjoy better patronage than this year. Therefore, the hotel operators should bear with the government, “He said.

The Special Adviser to the Governor of Osun State on Culture and Tourism, Mr Oladipo Soyode, has said that the tourism sector would be a major source of revenue for the state in 2016.

While applauding the effort invested by Governor Aregbesola at giving the Osun Osogbo grove a facelift said the government is also extending its tentacle to other untapped tourism sites to bring them to international standard.

Some of the tourism sites that have been upgraded include Erin-Ijesa waterfall, the Oba’s palace, state museums and ancient buildings among others.

“The few tourism sites that were developed have brought about development in the state and also attracted influx of tourists into the state.

“We have not started enjoying the money spent in developing the tourism sites yet but with time, we will start enjoying it.”

Giving a vivid assessment of the 2014 edition of Osun Osogbo, the Special Adviser acknowledged the low patronage, which he attributed to the prevailing Ebola crisis, thereby implored tourists, visitors and allied tourism investors to bear with the government.

Caution on Ebola did not affect our programmes —Olumoko

The Osun Osogbo Festival Marketing Consultant, Mr Ayo Olumoko has said that despite the restriction of visitors in the state, the event was still successful because everything went well as no programme was cancelled.

“The issue of Ebola only affected the income of business men and women of the state.”

Olumoko agreed on the government’s decision on restriction of foreign and non resident visitors, which he said was better than for the indigenes to be affected by Ebola.

“The money that will be spent in treating Ebola will be more than the money that would be realised by the business owners in the state,” Olumoko said.

Olumoko who is optimistic about the trend of innovations and sponsors support affirmed that next year’s edition of the festival would be better and more colourful than previous years.

Mrs Sally Mbanefo, Director-General, Nigerian Tourism Development Corporation (NTDC) , who was enthusiastic by the performance of the Children Cultural Fiesta sponsored by the corporation, lauded the age-long festival in Osun State.

She said that the festival is a veritable platform used to showcase the people’s heritage and a channel for cultural exchange to the world.

“Osun Osogbo festival is one of the special events which is listed in the tourism calendar for marketing to domestic and international tourists and visitors,” Mbanefo said.

The NTDC boss explained that the rationale behind the partnership with organisers of the festival was to promote cultural heritage to Nigerians in Diaspora vis-a-vis the world.

She noted that the collaboration was part of the corporation’s mechanism not only to promote the festival, but also to get statistics and data of local and foreigners, tourists to help plan for future celebration.

“The data will give us a sound idea of the totality of the festival and in turn, it would avail the Federal Government the technical knowhow at improving on their commitment and support to boost patronage in subsequent festival,” she said.

Mbanefo expressed satisfaction at the decency and efforts of the festival marketing consultant, Mr Ayo Olumoko at making the 2014 edition a success.

She pledged the Federal Government’s continual support at making the festival a rallying point for domestic and international tourists. 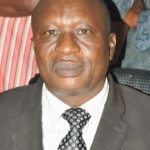 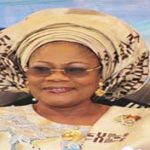