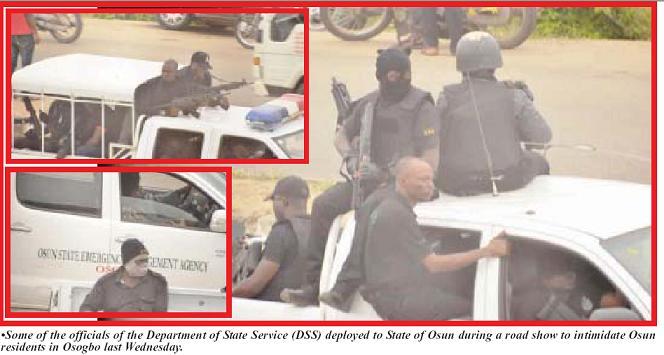 Panic initially gripped residents of the State of Osun on Wednesday, when operatives of the Department of Security Service (DSS) in about 50 Toyota pickup vehicles suddenly started firing into the air, as their convoy rode through Osogbo, on their arrival in the state capital.

The officials, no fewer than 5,000, some of whom wore masks, were fully armed and were conveyed round Osogbo in the siren-blaring vehicles.

They were also sighted in Iwo and surrounding communities of Osogbo. OSUN DEFENDER observed that some of the operatives, who sat on the roof-tops of the vehicles, fired gunshots into the air, thereby causing fear among residents and road users.

Dressed in black T-shirts, black trousers with caps and fully armed, the officials drove from their office along Gbongan-Osogbo Road through Olaiya Junction to Oke-Fia.

A source however disclosed to the medium that the operatives were deployed from Abuja, the seat of the Federal Government.
Motorists and commercial motorcycle riders hurriedly parked their vehicles, while the armed officials took over the roads and just as pedestrians also abandoned the roads for the arms-wielding security men.

The Director of the DSS in the State of Osun, Mr. Andrew Iorkyar, when contacted by the medium on the telephone, said that the officials were deployed to the state for the purpose of the August 9, 2014 governorship election.
He said: “They are our men. They are patrolling round to familiarise themselves with the terrain. They are in the state to protect law-abiding people. They are not deployed to terrorise anybody.

“You know that there are allegations and counter-allegations of stock-piling or arms by some politicians. We don’t want any breakdown of law and order. So, our men are in the state to ensure peace.” Asked why the officials were shooting into the air, Iorkyar said he was not aware of that and he promised to find out.

He urged the people of the state not to hesitate to make useful information available to the service.

The Special Adviser to Governor Rauf Aregbesola on Security Matters, Mr. Amos Adekunle, when contacted on telephone by our reporter condemned the incident, describing it as intimidation. Some residents, who spoke to our reporter, condemned the shooting, saying it was not necessary, because there was no crisis to warrant it.

The All Progressives Congress (APC) described the shooting as a ploy to scare voters away from coming out to vote.
The party Director of Publicity, Research and Strategy, Mr. Kunle Oyatomi, who spoke with one OSUN DEFENDER on telephone, said the incident was totally uncalled for, adding that it initially left people running helter-skelter.
Oyatomi, who also issued a statement on the development, asked the people not to be intimidated by the security men presence in the state.

He said: “The incident was unwarranted because there was no riot. They came from Abere end; they passed though Olosan to Olaiya and Oke-Fia thence to Ilobu. They would move a few metres and opened fire. People began to run helter-skelter.

“If this is how the Peoples Democratic Party thinks it would capture Osun, they are joking because the people’s wish can never be subverted. “No citizens should be scared or should run away when they see and or hear gunshots from security people because they have committed no crime. People should go about their businesses and ignore them.

“A country in which the security operatives are the ones doing what we are experiencing to citizens in Osun, calls for the gravest concern,” Oyatomi stressed 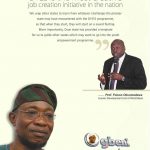