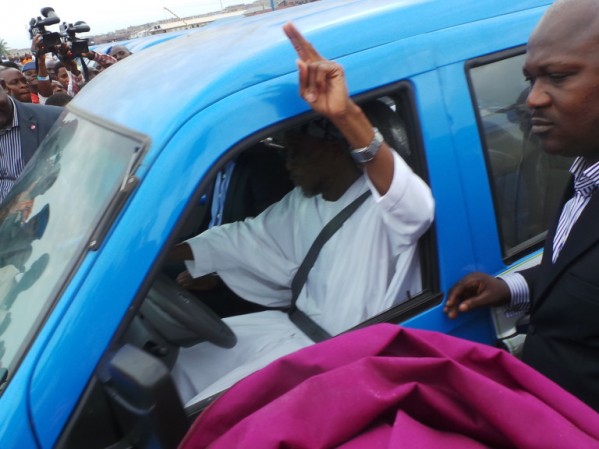 The Governor of the State of Osun, Ogbeni Rauf Aregbesola has vowed to not relent in his effort to transform the state to greater height.
He also assured the residents of the state that his fresh term in office will witness greater and monumental achievements in spite of the current national economic challenges facing the country.
Aregbesola made the promise at the official disbursement of a sum of N2 Billion under the Central Bank of Nigeria (CBN) N220 Billion Micro, Small and Medium Enterprises Development Fund and distribution of 22 mini buses to transport unions in the state.
At the event which was held at the Nelson Mandela Freedom Park, Governor Aregbesola said that his administration is more resolute and deeply determined to keep the economic ship of the state afloat against all odds.
While noting that the task to move the state forward in all fronts is the duty of all the residents, Governor Aregbesola maintained that his government has played its role in prudent management of the meager resources accruing to the state adding that the residents must equally display their patriotism by willingly discharge their civic responsibilities without hindrance.
He charged the people of the state to be fully dedicated to the course his administration has charted to make the state the pride of all.
“let me seize this opportunity to reaffirm the avowed commitment of our administration to the total emancipation of our people. In this outgoing term of the administration, we have been able to record landmark achievements in all facets of life of our state and incoming second term will witness ever greater and monumental achievements inspite of the current national economic challenged we are grappling with” the governor promised.
Ogbeni noted further that the establishment of Micro Credit Agency was a deliberate decision taken to have a virile, all embracing empowerment platform that would guarantee easy access to credit facility by operators.
He explained that the 22 mini buses distributed to the transport unions in the state was the promise he made to the unions when the government gave out the first batch of 40 mini buses in July 2014.
The governor noted that the additional 22 buses were the remaining of the 62 buses requested by the unions including NURTW and RTEAN.
He however lauded the Central Bank of Nigeria for coming to the aid of the state in the area of empowerment.
The Commissioner for Commerce, Cooperatives, Industry and Empowerment, Mr. Ismaila Alagbada expressed appreciation for the interest developed by the artisans, market men and women.
The Special Adviser to the Governor of Central Bank, Mr. Paul Nduka who represented the CBN Governor, commended Aregbesola’s administartion for mobilizing people to the flag off ceremony saying it is an indication that he is the strongman of the state.
He said that the scheme was put in place in order to engender growth and development adding that micro, small and medium credit facility is the only means to drive the economy of any nation.
Nduka maintained that the intervention torches lives especially at the grassroots and charged the beneficiaries to use the resources for the purpose it was meant so that it can go round to those yet to benefit.
In his goodwill message, the Chairman transporters in the state, Alhaji Jire commended governor Aregbesola for always embarking on the programmes that would have direct impact on the people.
Jire who described Aregbesola as a lover of development noted that his achievements within a space of three and half years proved him to be a visionary leader.
He therefore promised to continue to give support to Aregbesola in his quest to move the state to a greater height.
BIOREPORT 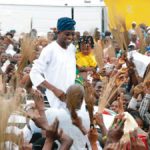