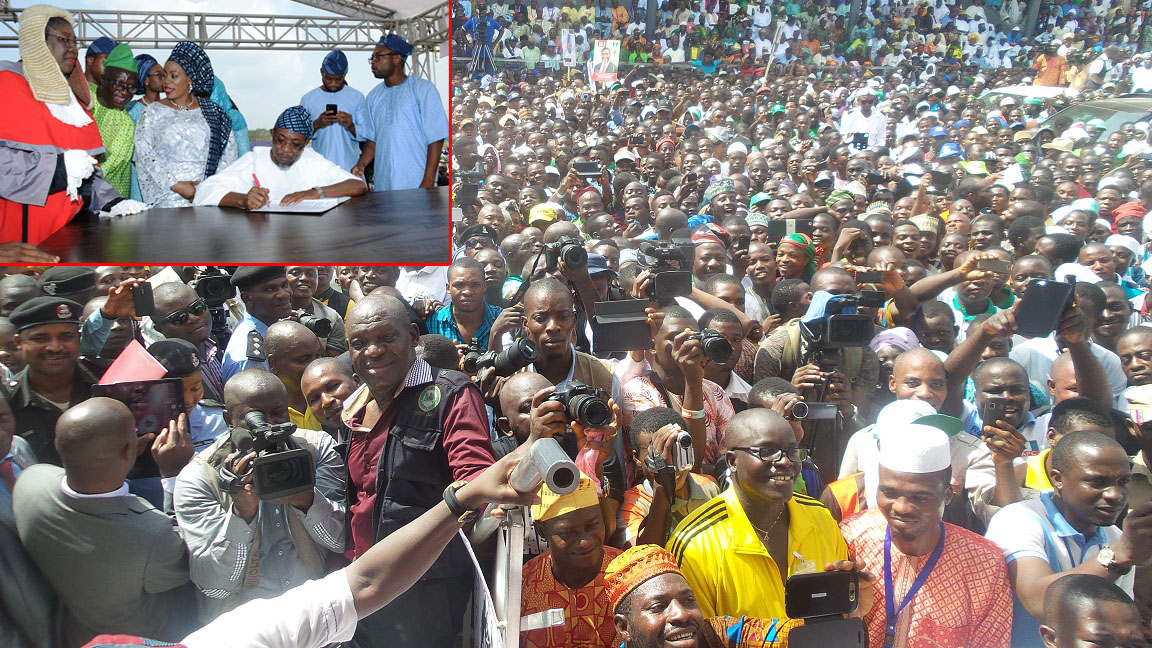 Osogbo, the Osun state capital stood still on Thursday as Governor Rauf Aregbesola was sworn in for another one term of four years amidst glamour.

It was a day leaders of the major opposition party, the All Progressives Congress crowded on Osun to celebrate the party’s recent victory over what it believes was the worst intimidation in the history of elections in Nigeria.

While Aregbesola blamed the Peoples Democratic Party for the nation’s multi-form woes, insisting the party must be ousted from power come 2015, lead speakers at the event reiterated their earlier positions that the APC remained the only answer for a prosperous Nigeria.

Former Head of State, Gen. Muhammad Buhari retired, told the mammoth crowd that gathered at the Osogbo Township Stadium to witness the occasion that in the midst of democratic impunities of the ruling Federal government, the Osun election epitomised the success of democracy in the country.

Buhari while congratulating the people for the success of the election, said Osun offered a promising future for the nation’s democracy‎ amidst unconstitutional removal of the governor of Adamawa, the shenanigans in Ekiti election and the orchestrated impeachment moves of speakers and governors in other states of the federation.

The retired general said, “The electoral success in Osun is a pointer to what will happen in the 2015 general elections as our people now know the party that love and work for their welfare and development.

“2015 will end the corruption, mismanagement and federal lawlessness and breach of the rule of law when APC takes over government in May next year.

“I charge the people of Osun to replicate the determination and strong will they exhibited during the August 9 election in February nest year.”

In his speech after taking the oath of office, Aregbesola stated that democracy is the best political system ever devised by mankind in the annals of power politics.

Aregbesola lamented the reversal of the nation’s fortunes, saying that the PDP-led Federal government has through its maladministration impoverished Nigerians, particularly in the last six years under President Jonathan.

He observed that what the country needs at this crucial moment is a radical and total change at the centre so as to rescue the country from its political ebb and economic doldrums.

He stated that the past 16 years of PDP has done nothing but increased the poverty level of the people, saying only the APC can rescue the nation from precipice PDP is leading it.
“Lest we forget, the religion of PDP is poverty.

Nigeria is saturated with leaders who are ever so quick to parade platitudes of their respective religion – denying its faith, essence and positive values.

“We must terminate the regime of self-seeking manipulators who currently parade corridors of power, accruing political profit by turning us against each other and further dividing us along ethnic and religious lines.
“The result of their politics of division is that Nigerians are poorer in the last 16 years whereas Nigeria as a country has never been richer save for recent months when oil price has declined. This manifests again in their continued lawlessness evidenced in the desecration of the National Assembly and the travesty at Ekiti Assembly.
” They have demonstrated without doubt their inability to protect Nigerians and the territorial integrity of our country. We must therefore be determined to vote out the party that has brought us to this sorry pass. We must show them the way out. We must let them know that on their way to hell, they will walk alone.
“Our party, the All People Congress (APC) promises prosperity, national unity and integration, security of lives and property, job and wealth creation, rule of law and constitutionalism and deepening of democracy,” he said.
He described the journey to Thursday inauguration of his second term as a road, though rough and thorny, but one he planned for with his innovative programmes and by making the people centre of focus of his administration in the last four years.
He continued: “‎We are here to celebrate democracy as the ultimate instrument of political empowerment ever bequeathed to humanity.
“The climax was the unprecedented effort to manipulate the election and subvert the will of the people on August 9.”

Earlier, in their goodwill messages, the APC National leaders and governor’s past and present, held that the will, courage and unity of the people of Osun culminated in the re-election of Aregbesola for second term in office.

Former Lagos State Governor, Asiwaju Bola Tinubu, said people’s oriented programmes of Aregbesola and that of the APC has shown that people will be on the side of the party, come February 2015.

He charged the governor to continue his people-oriented programmes like that of giving aids to the vulnerable elders, the Osun feeding programme and other youth empowerment schemes.

Tinubu said, “2015 election will witness a common sense revolution, which is the ability of our people to use their Permanent Voters Cards to send out the PDP government from Aso Rock.

“The country under Jonathan is worst today than it was four years ago. The steadfastness of the people today will culminate in the victory for our party in 2015”. The APC leader noted.

‎Also, Edo state governor, Adams Oshiomhole stressed that when people are united to fight, no power can defeat them, saying this is what Osun people demonstrated by voting Aregbesola for second term.

According to him, “The import of today must not be lost on us. The people of Osun showed to the whole world that when people are united in their fight, no power can stop them.

“The right to vote and choose a leader is an exclusive preserve of an individual but that of the people and Osun has shown that change is possible”. 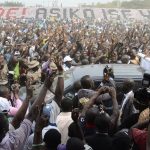 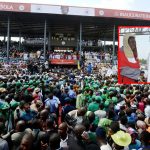