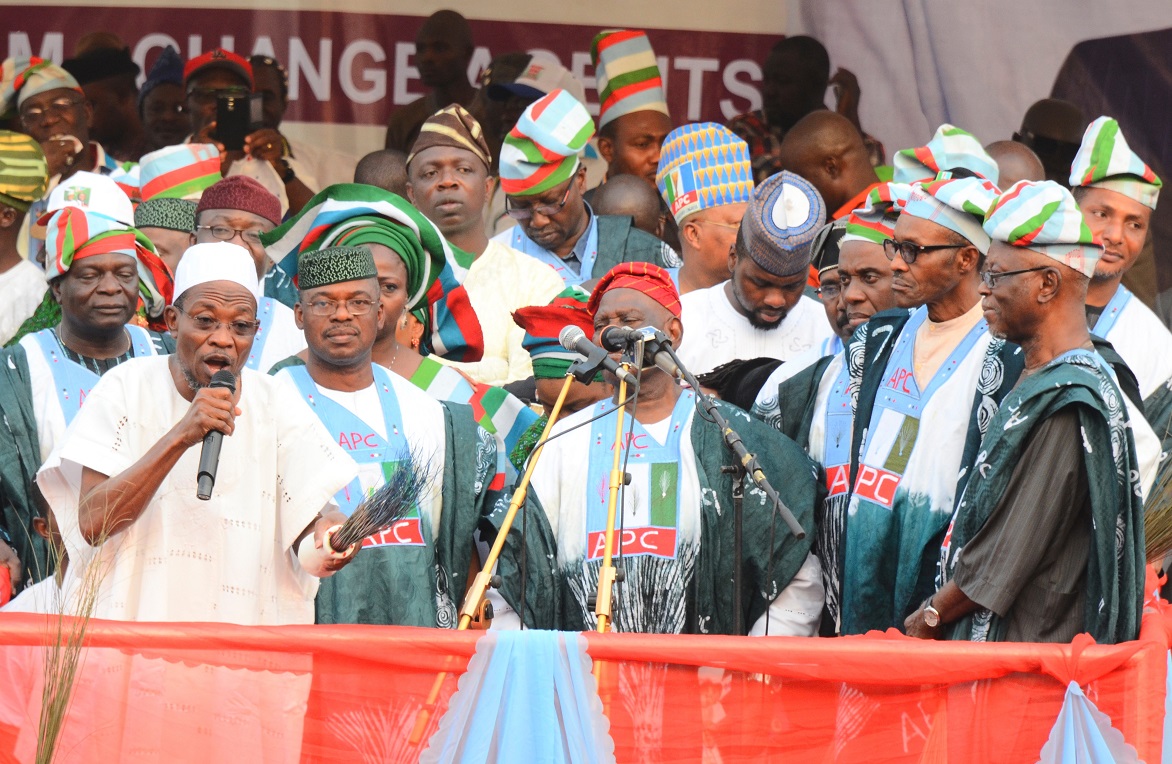 The ancient city of Osogbo was agog on Wednesday when the All Progressives Congress (APC) presidential candidate, Gen. Muhammadu Buhari stormed the South-west state of Osun in continuation of his campaigns for the 2015 general elections.

The Osogbo township stadium was filled to the brim as party members and supporters thronged the capital from across the state of Osun in their thousands.

They had insisted on waiting for Gen. Buhari since 10 AM as the candidate was attending a stakeholders workshop on non-violent elections in Abuja.

The APC presidential candidate, Gen. Muhammadu Buhari in his speech lamented that the country in last one and a half decades has found itself in vicious circle of bad governance, insecurity and breakdown of law and order.

He said unless something is done urgently, the nation will continue to wallow in political stagnation, economic depression and social insecurity.

According to the presidential candidate, APC is willing and ready to break this endless circle of socio-political misfortune.

He disclosed that through Agriculture and mining, APC will create jobs for millions of unemployed youths roaming the streets of the nation.

Buhari, amidst dancing and singing by the huge crowd of supporters, said “for upward of 16 years now, this country has found itself in a vicious circle of incompetence, unemployment, insecurity and Web of corruption.

“This circle will continue unbroken unless drastic efforts are made to arrest this downward socio-political trend. My party, APC has the blueprint to break this circle, halt the trend of misfortune and change it to fortune for the country.

“We are going to redouble our efforts in the Agriculture and mining sector to provide jobs for millions of unemployed youths. I urge you my people of Osun to collect your permanent voters cards so that you can vote en-masse for‎ APC come February 14.”.

‎Speaking earlier, the governor of the State of Osun, Ogbeni Rauf Aregbesola who laced his speech with various songs to which the crowd responded, noted that the upcoming election is going to be that of independence from poverty and under-development.

He held that 16 years of PDP has brought untold hardship and bad luck to virtually every facet of the Nigerian life.

‎Aregbesola stressed that every Nigerian who has the love of this country at heart will certainly know that this is the time for the change to rescue the fortune of Nigeria from the political buccaneers call PDP.

The governor pointed that the political configuration has changed as all the 6 geo-political zones have come together to speak with one voice, saying APC is the only good thing that can happen to the country.

‎According to him, “The vote of February 14 is significant as it is symbolic. It is a vote of liberation from poverty, bad governance, insecurity and total collapse of infrastructure.

“For 16 years, PDP has ruled this country and the country has got nothing to show for it, it is all 16 years of waste, misrule and backwardness.

“Therefore, anyone who has the love of the country at heart will definitely stand for change, which wind is blowing across the country. And Osun in its character is totally for APC and Buhari”.

Also, the National Chairman of APC, Chief John Odigie-Oyegun described the presidential candidate of the party as a man of courage, principle and honesty.

He noted that Buhari is a personality whose astuteness imbued him with the talent to see far ahead of others.

He held that a vote for Buhari is a vote to cancel insecurity, corruption and clueless administration.

“Today, across the country it is one singsong‎ ‘SaiBuhari.’ even our friends in PDP are also singing the same song. Everybody wants Buhari to bring change that the nation needs at this critical moment.” He emphasised.

A highpoint of the visit by Buhari to Osogbo was after the rally at the stadium and the candidate, in a long convoy drove through the major streets of the state capital.

As the convoy drove from the stadium through Aiyetoro, Onisekere, Sabo Junction, Igbona, Old Garrage, Okefia up to the Government House, it was a deafening shout of Sai Buhari from the excited crowd of residents who expressed support for the APC presidential candidate. 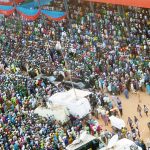