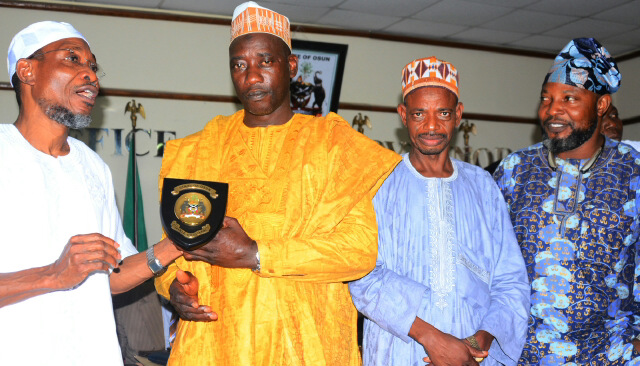 The Government of the State of Osun has been commended for living up to expectation and as well improving the standard of living of the citizens in the state.
The current government was also lauded for its commitment and dedication towards the welfare and general well-being of the masses since inception.


The commendation was given by the leadership and members of the Osun State Cow Dealers Association and Osun State Butchers Association, during an interactive session with Governor Aregbesola in his office, at Government Secretariat, Abere, Osogbo.
Speaking, the Chairman, Osun State Butchers Association, Alhaji Sulaiman Adebimpe commended Governor Aregbesola for taking the state to greater heights of economic prosperity even in the face of the present challenges confronting the state.
Alhaji Adebimpe who described Governor Aregbesola as a lover of the masses, said the impact of the current government has been directly felt by the people of the state and members of the association  in particular.
Adebimpe also saluted the present government for transforming the state and as well making life more abundant, meaningful and worthwhile for the citizenry.
Alhaji Adebimpe who acknowledged the present government on its numerous unprecedented landmark achievements, said the association was fully ready to support the government in its bid to place the state on the front burner of the economic sustainability.
According to him, Governor Aregbesola’s landmark achievement has shown to us that truly, he is a man of transformation and development as these were manifested in all his policies and programmes.
“We are here to commend our Governor on his giant strides in the state even at this time of economic hardship, he has never deviated from the right course.
“Our meeting with Mr. Governor was also aimed to deliberate on how to move the state forward by extending our collective support towards the government’s efforts for general development.
“We have observed that the landmark achievements of Governor Aregbesola remain legacies that can never be forgotten in the political history of Osun State as most of his projects being executed so far were aimed to better the lives of the people by meeting  their present and future needs.
“Though, we are all aware of the current economic situation in the country and its effect on our state, but irrespective of this, our Governor has remained resilient in his resolve not only to reposition our state but to place Osun to the front burner of economic sustainability.
“It is on these giant strides and track records that made us to identify with Mr. Governor at this period of economic challenges.
“Based on this, we shall do all we could to ensure that the state move forward as we are ready to contribute our quota by performing our civic responsibilities and as well support all the government’s policies to make our state the best place to be in Nigeria, Africa and the entire world”, Alhaji Adebimpe stressed.
Alhaji Adebimpe who lamented the numerous challenges facing members of the Associations, urged Governor Aregbesola to rescue his members from all forms of undue tribulations.
He attributed some of the challenges to what he described as low sales and the inability of the Association to build state-of-the-art slab, which according to him would go a long way to improve the volume of sales and as well given the real identity to the Association.
He therefore implored the State Government to assist the Association in building a befitting ultra-modern Slaughters’ Slab across the state so as to enhance and boost the activities of all butchers in the state.
In his remark, Governor Rauf Aregbesola described both Associations as sacrosanct, saying the time has come to establish a meaningful and beneficial relationship with the Associations.
Governor Aregbesola assured his government would satisfactorily do all it could to ensure total turn around in the Associations, just as he plans to give the Association a new look in the society.
He charged members of the Association on the need to support his government with prompt tax payment, adding that the greatest way to complement government’s efforts is through regular tax payment.
Governor Aregbesola who tasked members of the Associations on the need to remain supportive to his administration, disclosed that plans had been concluded to improve the status of the state’s Internally Generated Revenue, IGR in order to meet the numerous needs of the state and her people.
He therefore charged the Associations to brainstorm and deliberate extensively on the effective development levies and other legal charges to be paid to government’s coffers every month.
Governor Aregbesola however told the Associations that his government has made available, a Task Force Agencies which has been saddled with the responsibility of fishing out the tax invaders or whoever frustrates government’s efforts on the new development.
He therefore enjoined members of the Associations to comply with government’s policies on the need to improve the state, as he equally assured them of government’s support and collaboration to boost their business activities.
90 Views
4 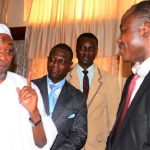 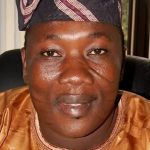