This was contained in the appointment letter to the monarchs which was signed by the Permanent Secretary of the Ministry of Local Government, Chieftaincy, Water Resources, Rural and Community Affairs, Mr. Muftau Oluwadare.
The Permanent Secretary explained that, the appointments are in line with Section 20, sub – section (1) of the Chief’s Law of the state of Osun 2002. While congratulating them on behalf of the government of the state, he added that arrangements are being made to publish the appointments in the Government Official Gazette. 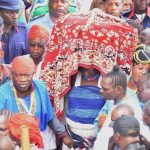