Osun State Governor, Ogbeni Rauf Aregbesola has charged members of the National Youth Service Corps posted to the state to be patriotic and resourceful in serving the nation.

Aregbesola said this at the closing ceremony of the 2016 Batch `B’ Orientation programme held at the NYSC orientation camp, Ede, Osun State.
The governor urged the corps members to integrate sufficiently with the communities in the state and identify with the problems and aspirations of their host communities where they would be carrying out their primary assignments.
He commended the camp officials who by their maturity, dedication to duty, understanding and selflessness contributed in their various ways in making orientation course a huge success.
The State Coordinator of NYSC in Osun state, Mrs Regina Iluebbey said a total of 2,276 corps members comprising 1,238 males and 1,038 females were registered for the orientation course.
She noted that the orientation course has prepared the corps members
for physical, intellectual capability.
She urged the corps members to serve with dedication and determination to make positive change.
Iluebbey also advised the new corps members to key into the Skil Acquisition and Entrepreneurship Development (SAED) programme of NYSCso as to become self-reliant. 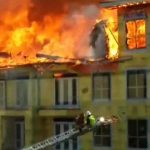