It was widely reported shortly after Muhammadu Buhari assumed office as the President of the Federal Republic of Nigeria that 27 out of the 36 states of the Federation including Osun State had difficulties in meeting salaries payment obligation of their workers as a result of the nation’s dwindling Oil revenue.

For the sake of emphasis, no fund was released for pension and gratuity by the CBN to the state government  despite the fact that it was included in the request of N64,327,492,947.01 for state workers and N25,871,920,000  for local government workers to the apex bank

A total sum of N34bn not inclusive of the pension was released to the Osun State government for state and local government workers’ salaries and allowances which is far less than the requested amount by the state .

However, to further display a high level of transparency in the disbursement of the loan referred to as  bailout fund, the state government and the labour unions agreed to supervise the disbursement of the fund for the state government and local government workers in line with the CBN guideline, an apportionment committee headed by the first NLC President, Comrade Hassan Sunmonu, with labour unions and other stakeholders as members was set up to monitor the fund and the revenue from other sources, This, no doubt, afforded the labour unions and relevant stakeholders the opportunity to monitor all transactions as attested to by labour unions and bankers involved in the bailout disbursement.
Despite the fact that pensioners were not captured in the bailout fund released to the Osun State government, Mr Rauf Aregbesola for his love for the pensioners magnanimously ensured that both state and local government pensioners benefited from the bailout fund. The government had paid the pensioners up till August 2016 in line with modulated salary structures as applicable to civil servants in the state. The pensioners should ordinarily not have been paid from the fund, but for the magnanimity of the governor, who said they must be included  because they had served the state diligently.
It is important to debunk insinuations aimed at blackmailing Mr Rauf Aregbesola’s administration that the bailout fund was mismanaged. Of all the states, no state has been transparent and open in terms of management of the use of the fund as Osun State.
Yes, you shall know the truth and it shall set you free!
All evidence have shown that the Osun State government has demonstrated a high sense of responsibility and transparency in the application of the fund and as of  November 30, 2016, the state government had N2.040 million in First Bank and N1.312 million in Wema Bank as balance of the bailout fund for the state with a balance of N173,226,000 domiciled in Zenith Bank  for the Local Government bailout fund  .
It is also worth noting that under that modulated salaries structure, a chunk of Osun workers still receive full salaries and allowances while only those in the senior cadre get half salaries. Confirmed reports even had it that the state government has directed an upward review of salaries and allowance under the modulated salary scheme for immediate payment of Sept, Oct, Nov and Dec 2016 salaries payment . It is no doubt regrettable that we find ourselves in such a situation as a result of dwindling revenue  which has made several neighboring states default in payment of salaries and allowance for between 8 and 15 months now.
The diligent use of the bailout given to the Osun State government has afforded her to continuously meet salaries obligation despite meagre allocation accruing to the state while unprecedented infrastructural development has continued across the length and breadth of the state  . 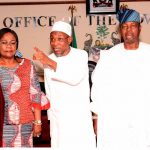