The family  of Ifedolapo Oladepo, a member of the National Youth Service Corps, who died during the orientation programme in Kano State, has said the exhumation plan by the panel investigating the death is not necessary.

The father of the deceased, Mr. Wale Oladepo, said Ifedolapo, a first class graduate of Transport Management from the Ladoke Akintola University of Technology, Ogbomoso, Oyo State, was killed  because the medical personnel at the NYSC camp  administered  a medication which Ifedolapo  reacted to, adding that they  refused  to heed the plea of  the deceased’s sister, a nurse, who  asked that the corps member  be taken to a teaching hospital for a proper treatment.
Wale said there was no need to exhume the remains of his daughter because autopsy would only reveal what caused the death and not the  negligence of the medical personnel at the NYSC camp clinic, which he insisted led to her death.

He confirmed that a Commissioner of Police called him from Abuja on behalf of the Inspector-General of Police, Mr. Ibrahim Idris, and told him of the plan to exhume his daughter’s corpse.
Wale said, “The person said I would take them to the place where Ifedolapo was buried, adding that we should bring the evidence we have.
“I told him that I would not provide any evidence now until they produce the call log of the conversations between the family and medical personnel at the NYSC camp clinic when Ifedolapo was taken there.
“I told him that exhumation for autopsy is the last thing to be done because that will only reveal the cause of death. But we must see the call log and we will match it with the telephone recordings that we have. We didn’t even know it will get to this stage but thank God we have the conversations recorded on the telephone.”
The bereaved father, who is a pensioner, said some corps members told him that Ifedolapo collapsed during the early morning drills at the camp, but was not attended to by the camp officials until later.
He said it was not true that his daughter reported to the camp sick and did not urinate for three days, saying she would not have been able to participate actively in all camp activities if she could not urinate for three days.
He said, “Some of my daughter’s  colleagues, who were at her bedside at the camp clinic, are ready to testify against the medical personnel at the camp clinic.
“They ( medical personnel) administered a medication on  her (Ifedolapo) and she reacted with rashes all over her body and she managed to take a photograph of the rashes on her hand and sent it via WhatsApp.
“Her tongue became twisted in a reaction to the medication administered on her. Her sister, who is a nurse, asked them to take her to a teaching hospital immediately, but they did not until five hours later.” 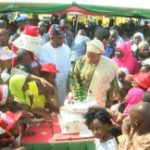