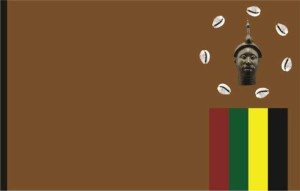 The seven cowries represent the seven grandsons of Olofin Oduduwa. Their military valour, diplomatic dexterity and trade mastery created wealth and resulted in their expansive kingdom.

The Brown Colour represents the colour of the earth and tone of the skin. The Ori Olokun stands for the common origin of the Yoruba and their dexterity in technology.

The Colour Band which is the Pan-African flag consists of official colours of the African race: the colour red represents the blood bond among Africans.