Osun State Governor, Rauf Aregbesola, has described a section of retired workers who addressed themselves as Internally Displaced Pensioners (IDP) in the state as bunch of ingrates.
Aregbesola spoke at the weekend when the Triangular Group of Pensioners held peaceful procession in Osogbo, to demonstrate their support to his government and assured him of their unalloyed loyalty.
He said his administration gave priority attention to retired workers and multiplied money for payment of pension by five times and paid as and when due until November 2014 when recession set in.
Aregbesola reiterated that his government borrowed as much as 25 billion Naira from banks to pay workers’ salaries and pension and stop it when it could no longer cope with the huge wage and pension.
About 3,000 members of the Nigeria Union of Pensioners (NUP) under the aegis of Triangular Group of Pensioners lauded Aregbesola for paying the arrears of their pension up to December 2016.
Governor Aregbesola who justified his love to workers and retired ones explained that Osun state is the only state in the federation that implement 142% pension increment approved by the Abacha military regime, adding that between 2015 and 2016, his administration had paid N9.6billion to retired workers alone.
“We implemented 142% increase in pension which other rich and buoyant states including Lagos has not implemented. No state government has paid as much as we have paid pensioners in Osun. We paid 9.5 billion to pensioners alone.
“We shall never experience IDP in Osun. We will keep praying for those states where there are IDP camps to overcome their problem because it is not a good thing to be displaced in one’s state. I can assure you that a better day has come.
“Our Pensioners would be well catered for. Their gratuities would be sorted out once there are resources to do so. Just bear with us and show understanding for now.
“The workers and pensioners are on my priority lists, In fact, we made N12 billion in Osun in 2016 and I paid N20.4 b to workers and pensioners alone. And that notwithstanding, we are working and there are infrastructural development all over the state.
“We are building schools and we are constructing roads across the state. We are doing our best within the available resources. Our opponents should stop playing dirty politics with this pension issue,” Aregbesola explained.
Earlier, the NUP Chairman, Prince Rotimi Adelugba said the pensioners were grateful to Aregbesola for his magnanimity and cautioned other retired civil servants in the state not to play politics with the issue of the payment of the pension by the state government.
He said: “The state government set up a committee headed by a veteran labour leader and former President of the Nigeria Labour Congress, Comrade Hassan Sumonu to fine-tune the issue of salary and pension payment in the state and suggest the best approach to the salary and pension issues in the state.
Osun Internally Displaced Pensioners Are Ingrates – Aregbesola
A section of pensioners held peaceful procession in Osogbo to demonstrate their support for Gov. Aregbesola
“The committee comprised leaders of labour unions in the state and after a comprehensive analysis of the financial situation of the state, the committee proffered a way forward and we all saw reasons to accept the recommendation of the committee in the best interest of the generality of the workers, pensioners and the good people of our dear state.
“We all agree that the state government should not downsize because we didn’t want any worker in the state to be sacked. Therefore, the only option we had was to agree with the modulated salary scheme in which the junior officers from level 01 to level 07 would get their full salary but the senior staff from level 08 and above would be earning half of their salary and the same thing applicable to the pensioners.
“It was agreed that the modulated salary would be revisited once the economy of the state improves and that was exactly what Governor Aregbesola did recently when the modulated salary scheme was reviewed upward. The Governor has never reneged in this arrangement but some retirees allowed politicians to use them to embarrass the state and that was unfortunate”.
“Though, we also need the money but we realised that we must show understanding since we also know the financial status of Osun State government. The state government has paid up our pension up till December 2016. We are aware that the payment of pension gulp N9.4 from the coffers of the state government and this is commendable.”
He said the retirees in the state want more from the state government and urged the Governor to sustain the payment of their monthly pension.
He also urged the Governor to create special units in all state hospital where senior citizens including the pensioners would be attended to when they need medical attention.
He condemned the action of some pensioners who claimed that they set up Internally Displaced Pensioners camp whereas they were not displaced. He warned that such action could send a wrong signal about the state.
He said NUP sympathised with Nigerians who are in IDP camp in some Northern states and prayed God to give them succour.
“We also commend our dear Governor Aregbesola for his love for the workers and the pensioners in the state.
“The Governor paid the backlog of the arrears of 142% of pension increase to eligible pensioners. We are grateful to Governor Aregbesola for jacking up the monthly pension bill from N200 million to 600 million,” the NUP chairman said.
The retirees terminated the procession at the Nelson Mandela Freedom Park and held special prayers in Islamic and Christianity ways.
They offered prayers for Osun State and Nigeria and sought the intervention of God on the economic recession that has bedevilled the nation in which Osun state was not exempted. 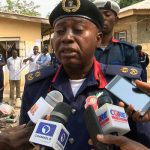 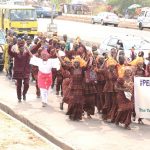