Young farmers club among school students and pupils is a good initiative that will arouse the interest of the younger generation to engage in agricultural practices that would boost food production in the state.
Prince Wale Adedoyin, former Commissioner for Agriculture and Food Security, stated this during an Agricultural fair organised by the out-going members of the Voluntary Services Oversees (VSO) at Igangan Community Middle/High School in Atakumosa East Local Government area of the State of Osun.
Prince Wale Adedoyin maintained that Igangan community young farmers club has demonstrated a good example of farming knowledge at a tender age which is worth of emulation by other schools in the State.
Prince Adedoyin who also commissioned Igangan Community Young Farmers Club Demonstration Farm, that contains different variety of vegetables like Carrot, Cucumber, Okra, Pumpkin, Water-leaf Tomatoes among others admonished the students to embrace agriculture as a means to self reliance and economic buoyance.
He also appreciated the initiators of the Young Farmers Club in Igangan Town for their selfless service to improve the life of rural dwellers. Prince Adedoyin further disclosed that, members of the Voluntary Services Oversees (VSO) are well to do people from United Kingdom (UK) and America who just have passion to change the life of
others.
Prince Adedoyin noted that all benefits coming to the state of Osun was made possible as a result of the relative peace in the state and the adequate support which Ogbeni Aregbesola administration gives to Agricultural development in the State of Osun.
Also speaking, the Principal of Igangan Community Middle/High School, Mr. Orisajinmi Lekan Raphael also attested to the positive impact of the Volunteers in the School and Igangan Community at large.
Mr. Orisajinmi pointed out that, the volunteers donated many books in different subjects and assisted in teaching the Students 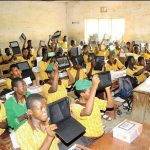