The Coordinating Director of the State of Osun Ministry of Information, Home Affairs, Tourism and Culture, Mrs Femi Webster- Esho commended Iwo Community for their support to the state government in the maintenance of government infrastructure in their domain
Mrs Webster-Esho gave the kudos today at Iwo while on an inspection tour of the Fire Service Stations in the State.
The Coordinating Director was particularly happy at the neat and conducive environment of the State Fire Station at Iwo which was made possible through the assistance given the state government in the form of rehabilitation of the Fire Station by Iwo community. She appealed to other communities in the state to emulate the good example
of the people of Iwo.
Mrs Webster- Esho then enjoined the firemen at the station to maintain the facilities while she equally praised them for their commitment to work.
The inspection also took the Coordinating Director to the fire station in Ikire as well as the Training Station of the State Fire Service at Apomu where she observed that government would rehabilitate the training station to prevent the encroachment of the station by the people. 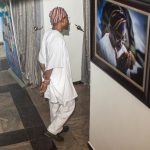