The Attorney General of the State of Osun, Ajibola Basiru has said that law making is not a one-off process but a continuous and enduring one.

Speaking to Members of the Nigerian Bar Association (NBA) Lawyers in the Media (LIM) Forum in Lagos recently about the development of law and the administration of justice system in the state, the Commissioner for Justice informed them that the state had commenced work on several laws in Osun State, which according to him was last reviewed in 2002.
“Making law is an ongoing process, and the state is currently focused on developing capacity within the Judiciary for speedier dispensation of Justice, the AG said.
He hinted that the Chief Judge of the State of Osun was currently reviewing the Civil Procedure Rules, which according to him will ensure the quick dispensation of Justice is both civil and Criminal matters.
He continued, “Recently, 44 new laws have been passed while a few are still in the works. Some of those in the works include, the Administration of Criminal Justice Law,”
Speaking extensively about the administration of justice system; the efficiency of the judiciary and the quality of judgments, Basiru blamed the lack of infrastructure and financial autonomy for the decay in Nigeria’s Judiciary.
He said, “While there are serious infrastructural challenges in the Judiciary face, the lack of independence and autonomy faced by the judiciary is just as grievous. It is damaging.”
“We do have three arms of government, which are not totally independent of each other but rather exist to complement each other. How can it be right and efficient for the Executive to provide allocations for the Chief Judge to build courts, how can the same executive be checked.
“Note that, this is not to say that the Judiciary should not be well funded. On the contrary, the Judiciary should be well catered for as it will encourage more local and foreign investments and that is why we are working hard to ensure that the judiciary is restructured.
On the role of the police in the dispensation of justice, the AG said, “We must realise that the Police and the Nigerian Prison service play a vital role in this regard. Unfortunately we have no authority over these institutions. That notwithstanding, we are trying our best to work with them to ensure that we decongest our prisons and prosecute the right people.”
The State of Osun has indeed scored some victories with its dispute resolution system. The AG disclosed that only about 10% of disputes in the state is currently being resolved through litigation, while over 90% are resolved through Alternative Dispute Resolution (ADR) mechanisms.
Speaking about the State’s achievement in the justice sector, Basiru said, that the state has successfully reduced its caseload, largely attributing this to the use of information and communication technology (ICT) to track cases and to better understand the challenges in the system.
“We discovered early in this administration that it was not all about legal training, it had to go beyond legal training to ICT and Managerial skills for efficient case management system.”
“This is why we continue to invest in manpower development and training for our people.
“Indeed, ours has been a success story so far and we believe that we will still to do greater things in advancing and administering the laws of our state.” 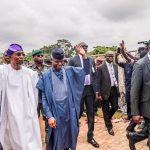