The theme of this year’s conference is ‘Africanity’ which, according to the organisers, is about the distinct African identity and Africa’s contribution to humanity in face of the increasing marginalisation of the continent in global affairs.

Aregbesola said Africa presents itself as a mystery to Africans than non-Africans. He averred that the continental Africans are hardly conscious of their Africaness thereby taking their identity as Africans for granted.

He said Africans only showcase their African identity only outside Africa or in a situation of contact with other races. According to the Governor, the continent would remain underdeveloped unless it’s agriculture forms the fulcrum of its economy.

He noted that the continent must as a necessity graduate from being only source of raw materials to the West for it to be an economic power house among developed nations of the world. He disclosed that the need to return to agriculture informed his administration’s pioneering of food revolution in the state so as for it (state) to feed it’s people.

“There are two conceptual Africas. The first is the Africa endowed with huge and humongous human and material resources.

The second is the largely underdeveloped Africa with a history of slavery and colonialism, ravaged by wars, hunger, poverty and the leading global aid recipient.

“It is beyond disputation that Africa has some of the largest deposits of mineral resources in the world. Her leading lights like Professor Wole Soyinka, late Chinua Achebe, Ali Mazrui, Dudley, Ade-Ajayi, Tomori, Oluponna, Falola and others rank among the best in their fields.

This is outside of legendary sportspersons that have done the continent proud. “By the account of the Organisation of Economic Cooperation and Development (OECD), Africa led the global begging troupe with a total aid outflow to Africa in 2013 at $46 billion, only followed by Asia in a distant second with $25 billion.

“This is the burden that all Africans, especially the Diaspora, carry as they interact with the world. These negative indices are at the back of the mind of Europeans and other developed people when they meet or have dealings with black people. Regrettably, this was not the Africa of the past.

“What then has happened to Africa? How have we regressed? How have we become underdeveloped? The great task of our generation then is how to return Africa into its leadership position by harnessing its human and material endowments. “Africa’s economy should be re-oriented away from its present Eurocentrism to Afrocentrism.

We are not going to be an economic powerhouse if our agriculture consists mainly of producing the raw materials for others industrial production. “I pioneered food revolution in Osun by encouraging farmers to plant food crops, in order to feed our people. Africa should do the same. Our mineral resources should be developed to feed our industries, instead of feeding Euro-American and now Asian industries,” Aregbesola said.

The governor also reiterated the need to review the nation’s education system with a view to laying emphasis on skill acquisition so as to produce resourceful graduate that can stand on their own. He also called on the organisers of the conference to rethink and reconsider teaching in the indigenous African languages as this had been proved to aid better understanding by the late educationist, Professor Babatunde Fafunwa.

The governor equally called the attention of all stakeholders and government to address Africa’s women’s empowerment, noting that the current economic disempowerment of women in this part of the world could lead to unpleasant social consequences.

He continued: “Considering the situation in Africa, it is very seductive to ask for a second independence, not from external forces this time, but from self-imposed restrictions.

“The identity, recognition and respect we seek from outside will only come when we change our situation internally. Then we will get the respect of the world.”

The keynote Speaker, Professor Nini Wariboko said Africa has a retarded progress owing to the break down in its knowledge system.

Wariboko, a professor of Social Ethics from the University of Boston, averred that Africa was absent on the ladder of its deserving great position because there is a missing philosophy of Africa’s original identity.

He lamented that this lack of true identity is responsible for the continent’s stagnated growth. “Africa has not achieved it’s deserved greatness because of missing philosophy of original African identity. 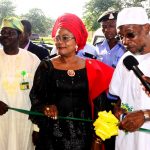