The Nigeria Labour Congress (NLC), Osun State Chapter, has assured the State government that workers in the state would continue to partner with it, to ensure that the state’s Internally Generated Revenue (IGR) is improved.

They believe that revenue growth would enable the government meet its statutory duty.
The State Chairman of the union, Jacob Adekomi, gave the assurance on Thursday ‎while speaking to Channels Television in Osogbo the State’s Capital.
The NLC chairman said Governor Rauf Aregbesola, in response to a letter written to him by the labour unions, promised to look into the general welfare of the workforce in the state.
The Governor, according to him, has directed that the 2014 and 2015 leave bonus of the workers be approved for payment.
He stated that the Governor at a meeting with all the Labour leaders in the state assured them that the arrears of salaries owed workers on Grade Level Eight and above would be paid as soon as funds were available.
“The Labour leaders wrote a letter to the Governor, demanding for full payment of salaries, from July last year for Level Eight and above, also demanding for the withdrawal of the circular prohibiting promotion confirmation and arrears of pension to be paid and also welfare packages for the workers generally.
“The Governor invited us for a meeting ‎last week and there the Governor said he knows he is owing us, those arrears of salaries and he is going to pay.
“He even encouraged us to look inward to do a lot of things to improve the IGR so that the IGR can be used to augment the allocation coming from the Federal Account.
“He has said that if he has more than enough to pay full salaries, he will pay,” the union leader stated.
“The Governor also said that if he had more than enough money in Osun, ‎he can even increase our salaries and give the committee involved to pay more than what the workers are earning now. He only tasked us to go to all agencies to encourage them to pay their taxes and do their civic duties so salaries can be paid as at when due,” he also told reporters.
On the issue of the tertiary institutions’ lecturers that were disengaged earlier this year, Mr Adekomi said that the Governor had told them that the Speaker of the House of Assembly in the state had forwarded the report of the committee to him.
He said that the Governor had also promised that he would look into the report and take action on it.
“We a have a good relationship with the State government and as far as we are concerned we have no problem with him.
It is only the money that is not there that is the issue,” he added 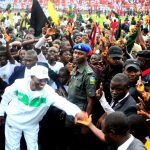 Osun@25: The Legacy Side Of The CoinAugust 29, 2016
Past Osun Leaders Laud Governor Aregbesola’s LeadershipAugust 31, 2016