As part of efforts to boost the internally generated revenue in Osun, the state government and the Cattle Butchers Association in the state have both agreed on seven hundred naira as the  new levy to be paid on each cattle slaughtered in the state.

This was the outcome of a meeting between the butchers and representatives of the state government held at the government secretariat in Abere.
It was also agreed at the meeting that henceforth, the establishment of a new slaughter slab will attract the payment of 50,000 Naira while the registration of each member of the butchers association will attract the sum of 2,500naira and subsequent payment for renewal will attract 1,000 Naira annually.
Speaking during the meeting, former Commissioner for Agric and Food Security in the state, Mr Wale Adedoyin stated that the levies became necessary in a bid to boost the IGR of the state and at the same time provide the necessary facilities at the slaughter slabs across the state.
The consultant to the governor on agric and food security stressed that the administration of Ogbeni Aregbesola does not intend to cause hardship or pains to the butchers through the introduction of the new levies, but to make life better for all and sundry in the state even in the face of the current economic challenges facing the country.
In their separate remarks, the Patron of the state butchers association ,Alhaji Tiamiyu Alamu as well the chairman, Alhaji Sulaiman Adebimpe thanked the government of the state for always carrying them along in decisions that affect the association, saying that members of his association will strive to comply with the new laid down rules.
In his remark, the Coodinating Director in the Ministry of Agriculture, Food Security and Youth Engagement, Dr Bukola Aluko assured the butchers that government will continue to provide facilities and support that will make their job easier. 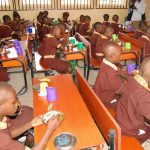